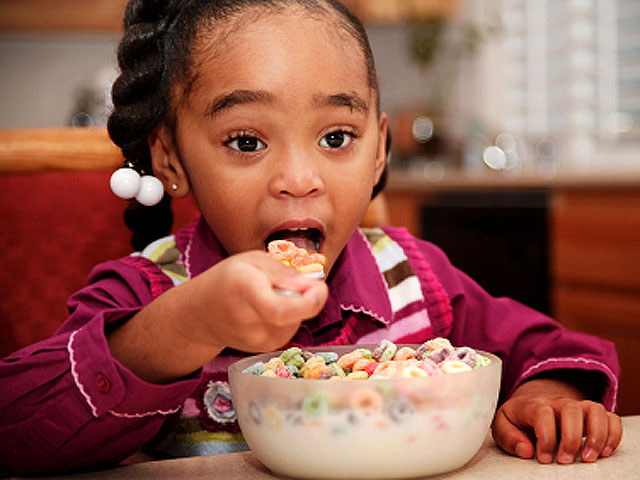 (CBS) Kids are getting way too much added sugar in their diets, according to a new report from the CDC, and that could raise their risk for obesity and chronic diseases.

PICTURES - Sugary cereals: Which are the 10 "worst"?

The report from the CDC's National Center for Health Statistics found the percent of calories kids take in through added sugar declined between 2007 and 2008. But the report also found 16 percent of total calories consumed came from added sugars. Boys were found to take in more of the sweet stuff: 16.3 percent of boys' calorie intakes, compared to 15.5 percent in girls. The 2010 Dietary Guidelines recommends limiting intake of discretionary calories, including added sugars and solid fats, to a total of 5 percent to 15 percent daily.

"Boys 12 to 19 got 442 calories [a day] from [added] sugar," study author Dr. Cynthia L. Ogden, an epidemiologist at the NCHS, told WebMD. "A little over three regular sodas a day would give you that."

Consuming added sugars has been tied to an increased risk for heart disease among adolescents and cholesterol problems, according to the CDC.

"The amount of sugar consumed is still extraordinarily high," Dr. Robert Lustig, professor of pediatrics at the University of California, San Francisco, told WebMD. "The amount is still so far over what any rational physician, dietitian, or government agency would have us be eating."

Lustig proposed in a February commentary that sugar should be regulated by the government because it is "toxic," unavoidable, and there is potential for abuse, HealthPop reported.

Where are all these added sugars coming from? The report said 59 percent of added-sugar calories come from foods and 41 percent from beverages, but soft drinks are still the single biggest source of added sugar. What's more, the report found most added sugar calories were consumed at home, not at schools which are often the target of nutritional legislation.

"Soda consumption is high, but we shouldn't lose sight of the added sugars in foods such as muffins, cookies, sugar-sweetened cereals and pasta sauces," Ogden told USA Today. "Many processed foods have added sugars. Those foods contribute more than the beverages."

What can be done to reduce sugar intake?

Dr. Wendy Slusser, an associate clinical professor of medicine at the Mattel Children's Hospital at the University of California, Los Angeles, told MSNBC that the new report is an opportunity for families to choose healthier options for their kids at home.

"Parents think they're doing what they're supposed to when they give their kids sports drinks on a hot day," she said. "If you substitute water for sugary drinks, that's a huge step in the right direction."

She also said sugar intake could be lowered in the home by switching to a healthier cereal brand. A report by the Environmental Working Group pegged the 10 worst cereals in terms of sugar content, HealthPop reported. The group found Kellogg's Honey Smacks contained the most, with nearly 56 percent of the cereal being made of sugar.

Paul Pestano, a researcher with the EWG told WebMD people should "Try to limit processed foods because that is mostly where it comes from." He said these processed foods include granola bars, cookies, candies, jams, syrups, and even canned fruit.

More than one-third of American children and adolescents are obese. The CDC has more information on healthy tips for parents.