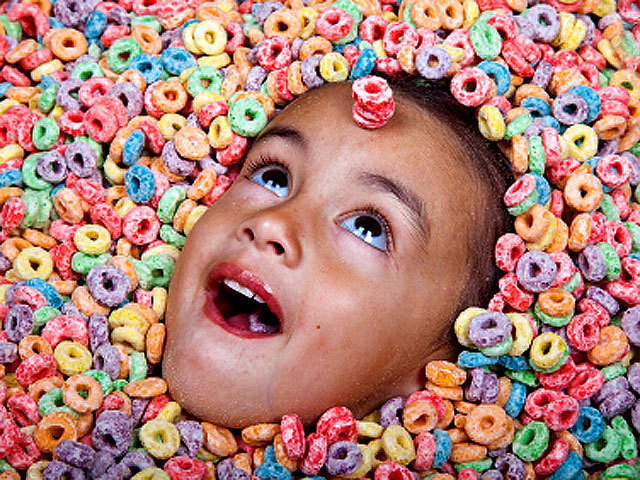 (CBS) Sugary cereals may be a convenient way to get kids to eat breakfast, but just how much sugar lurks in your child's cereal bowl?

PICTURES: Sugary cereals: Which are the 10 "worst?"

Try more than Twinkies and chocolate chip cookies, according to a new report from the consumer watchdog, Environmental Working Group (EWG).

"Kids should not be eating sugar for breakfast," Dr. Marion Nestle, professor of nutrition at New York University, said in a written statement released by the EWG. "They should be eating real food."

For the study, researchers looked at sugar content in 84 popular cereal brands. The researchers found 44 of the cereals were so sugary, that a one-cup serving would contain more sugar than three Chips Ahoy! Cookies.

"Consumers have enjoyed the great taste of Cap'n Crunch for decades," a spokesperson for Quaker Foods said told CBS News in an email. "While it's not marketed as a health product, it does include essential vitamins and minerals and offers consumers a low-fat breakfast option when paired with low-fat milk and a serving of fruit."

"It's important to remember that cereal contributes less than 4 percent of the added sugar in the U.S. diet, and kids who eat a cereal breakfast - regardless of the sugar level - have healthier body weights than those who skip breakfast or eat other popular breakfast foods," Dr. Lisa Sutherland, Vice President of Nutrition, Kellogg North America, told CBS News in an email.

Marlo Mittler, a child and adolescent nutritionist at Cohen Children's Medical Center in New Hyde Park, N.Y., agrees with Sutherland in that kids who eat cereal for breakfast have healthier body weights than those who skip breakfast.

But the problem with eating sugared cereal, she told CBS News, is "it continues to snowball into a bigger picture of unhealthy habits."

When you wake up for breakfast your body needs fuel, Mittler said, but if that fuel comes from sugary cereals, your blood sugar levels rise. Once you digest the cereal, the blood sugar levels fall back down, which signals the brain that it needs more sugar, so throughout the day kids may turn to candy, juices, and other sweets. When blood sugar keeps rising and falling, it makes the body feel hungrier and makes concentration more difficult. Thus people turn to more sugary foods throughout the day and the cycle repeats. The sugar that doesn't break down is eventually converted into fat.

Kellogg's said on its nutrition website that people should choose cereals that contain nutrients such as fiber, vitamins and minerals - which many sugared cereals are fortified with - and save less-nutritious sweet foods such as candy and regular soft drinks for occasional treats.

Kellogg's added, "A breakfast that includes presweetened cereal is a great vehicle to get some nutrient-rich milk and fruit into your child's tummy, too!"

"Well, that's true, if only their cereals actually delivered them," Dr. Robert Lustig, director of the weight assessment for teen and child health program at the University of California San Francisco, told CBS News in an email. He said picky children are more likely to choose sugared cereals because "sugar is addictive."

Lustig's research has shown some of the dangers from taking in too many calories from sugar, namely increasing risk for obesity and diabetes. He said the USDA does not have a daily recommended intake for sugar, so no one knows for sure how much is too much.

Should kids avoid sugary cereals all together?

"Moderation is key," Mittler said. She suggested that if your child is picky and has a sweet tooth, then to cut half of the cereal with a high-fiber alternative. That will help kids feel full and give them necessary nutrients while balancing out the sugar content, preventing the seesaw effect in blood sugar levels.

But for those kids who haven't found their love of sweets?

"If you've never started with the pre-sweetened stuff, I'd never go there," she said. "You only crave it once you have it."