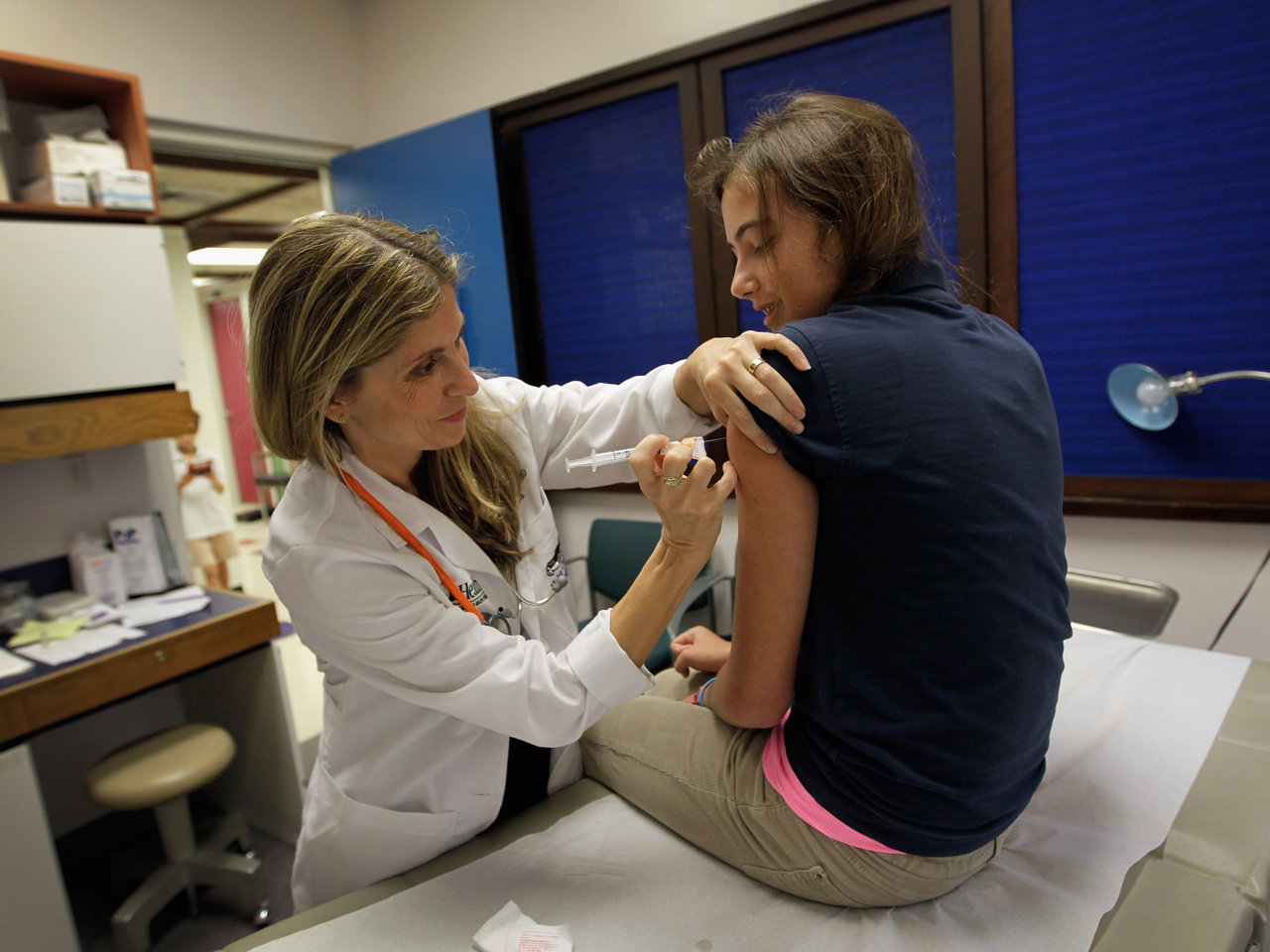 Rates of HPV strains related to genital warts and some cancers have decreased 56 percent among American teen girls since a vaccine was introduced in 2006, the Centers for Disease Control and Prevention reported Wednesday.

The government health agency's new study, which was published in the June issue of The Journal of Infectious Diseases, shows that rates of vaccine-type HPV prevalence dropped from 11.5 percent before the vaccine was introduced to 5 percent by 2010 for 14 to 19 year-old-girls.

"These are striking results," CDC director Dr. Tom Frieden said on a conference call Wednesday. "I think they should be a wake-up call that we need to increase vaccination rates because we can protect the next generation of adolescents and girls against the cancer that is caused by HPV."

Human papillomavirus (HPV) is an ubiquitous group of more than 100 viruses, 40 of which can be transmitted sexually. About 79 million Americans are currently infected with HPV, according to the CDC. Nearly all sexually active men or women will contract at least one type of sexually transmitted HPV in their lifetime.

For most people, the body will build immunity against the HPV virus, and it will go away. However, for some people the virus persists. Two strains of HPV --  HPV16 and 18 -- are linked to 70 percent of cervical cancer and associated with other forms of cancer, and two others -- 6 and 11 -- cause 90 percent of genital warts.

Some strains can also cause cancers of the oropharynx (back of the throat, including the base of the tongue and tonsils), vulva, vagina, penis and anus. Recently, actor Michael Douglas highlighted the fact that HPV can cause oral cancers, one of the fastest growing cancers in the country. Dr. Lori Wirth, medical director of the Center for Head and Neck Cancers center at Massachusetts General Hospital in Boston, explained previously to CBSNews.com that oropharyngeal cancer rates have increased 225 percent from the mid 1980s to the mid 2000s.

Scientists are hoping to develop a blood test topredict if a person may be at increased risk of developing oropharyngeal cancer.

Two vaccines currently exist that can provide protection from these HPV strains. Gardasil provides protection against HPV strains 6, 11, 16 and 18, and is Food and Drug Administration-approved for men and women between nine and 26. Cervarix only provides protection from strains 16 and 18, and is approved for women between 10 and 25. It is suggested that the vaccines may provide some protection against head and neck cancers caused by HPV, but Frieden pointed out that there is no definitive proof yet.

The vaccine offers an 82 percent effectiveness rate, but the patient must receive all three doses over six months. It is only effective if the person receives the vaccine before they have contracted HPV, which is why it is recommended for people to receive the dose when they are 11 or 12 years old, well before the age of sexual activity. However, it can still be administered until the woman is 26 or the man is 21, if they did not receive it when they were younger.

"The vaccines that are available right now are one of our only protections against HPV," Dr. Nieca Goldberg, director of the Joan H. Tisch Center for Women's Health at NYU Langone Medical Center, previously told CBSNews.com.

The vaccines were approved in 2006, so the CDC looked at HPV rates from 2003 to 2006 and then from 2007 to 2010, after they were available. The data was taken from the National Health and Nutrition Examination Survey (NHANES). In total, 56 million doses were administered in the U.S. since 2006, and 170 million have been distributed around the world.

While the HPV decrease was significant, the CDC is urging more people to make sure that their family members get the full dose of the vaccine. The U.S.  has a goal of an 80 percent vaccination rate, but only 35 percent of girls in 2011 received the full dose, CDC researcher and study lead author Dr. Lauri Markowitz said on the press call. Fifty-three percent received at least one dose, but the efficacy of the vaccine without a full vaccination series is unknown.

"Rwanda has vaccinated more women in their target population that in the U.S.," Frieden said.

The CDC emphasized that the vaccine is safe. The most common side effect reported was fainting, which is a side effect for any vaccine. In addition, further research showed that since the introduction of the vaccine, there was no increase in lifetime sexual partners nor increased sexual rates in girls aged 12 to 19.

"Every year we delay in reaching that [vaccination] rate, another 4,400 women will develop cervical cancer," Frieden said.