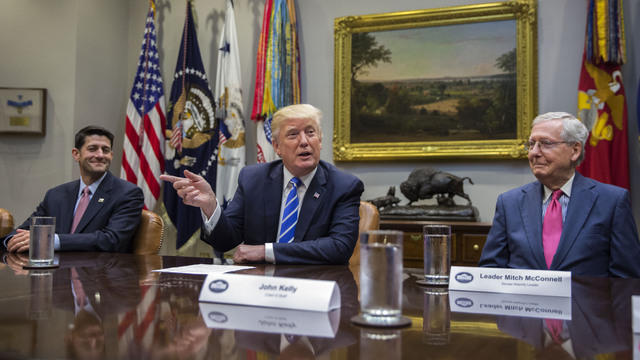 The Republican tax plan faces opposition from a majority of Americans. Over half disapprove of it – including four in 10 who disapprove strongly, and only one in five Americans expect their own taxes to go down.  Though the plan finds support from Republicans who believe it will help the economy overall, only one-third of Republicans expect their own taxes to go down. Large majorities of all political stripes believe the plan will help corporations and the wealthy, but only one in three believe it will help the middle class.

Partisanship plays more of a factor than income when assessing the Republican plan:  Democrats of all income levels tend to oppose the plan, while the plan is favored by Republicans regardless of income.

Few Americans think the plan will lead to lower taxes for them personally, and this is true of Republicans as well, despite their strong support of the plan. One-third of Republicans think their taxes will be lowered; most Democrats expect their own taxes will go up. By almost a 2 to 1 margin, independents are more likely to think they'll go up rather than down.

Most Americans of all political persuasions believe the plan will help large corporations, the wealthy, and Wall Street investors. More think these groups will benefit than think they themselves would.

This is the case among Republicans too. Just over half think the plan will help them and their families, a figure that drops to a quarter among Americans overall.

Republican optimism about the plan's effect on the economy may be because Republicans agree with the idea that large corporations will use the money they save from tax cuts to create jobs.  Six in 10 Republicans think this will happen. Just over a quarter of Americans overall agree.

Republicans also see some benefits to the Republican tax plan that other Americans do not.  Seven in 10 Republicans think the new tax plan will help the economy.  This view is shared by just 6 percent of Democrats and just a third of Americans overall.

Despite low expectation of tax relief for themselves, more than three in four Republicans say the plan is fair to people like them, a sentiment that cuts across income levels, suggesting that their views are driven more by the prospects for the wider economy.  In contrast, nearly nine in 10 Democrats say the plan is unfair.

While most Democrats and over half of independents think it's just a few people at the top of the economy that have a chance to get ahead, three in four Republicans think the playing field is even.

Republicans are more likely than they were last year to think everyone had a fair chance to get ahead in the U.S.

More than half of Americans say they would be either disappointed or angry if the tax plan is signed into law.  Even among Republicans, enthusiasm is somewhat muted.  While most Republicans would be satisfied to see the Republican plan enacted, just one in five describe themselves as excited by the prospect.

The Tax Plan: Impact on the deficit, social programs

But most Republicans don't believe the new tax plan will grow the deficit. Sixty percent of Republicans think the plan will decrease the deficit over time.  This view is not shared by most Democrats and independents.

And while most Americans overall think the tax cuts will be paid for at least in part with cuts to Medicare and Social Security, most Republicans (51 percent) don't think this will happen.

Where Republicans (62 percent) agree with most Americans is that changes to the Affordable Care Act – such as the elimination of the individual mandate - should not be part of the Republican tax plan, most Republicans who would prefer that the ACA be left out of the legislation nevertheless approve of the Republican plan in large numbers.

Republicans may see this tax plan as the president keeping a campaign promise because they are far less likely than Democrats or independents to see his administration's policies as favoring the rich over other groups.

President Trump's handling of both tax policy and the deficit is met with disapproval among most Americans, but large majorities of Republicans approve. Of the issues asked about in the poll, he gets his highest approval rating from Americans on his handling of the economy.

Sixty-four percent say the nation's economy is in good shape. The public's views of the economy have been positive for the past year.

Overall, 36 percent of Americans approve of the job Donald Trump is doing as president, while 57 percent disapprove. That's a slight dip in his approval since late October but similar to where it was in September.  Most Republicans continue to approve, while Democrats overwhelmingly disapprove.

This poll was conducted by telephone December 3-5, 2017 among a random sample of 1,120 adults nationwide.  Data collection was conducted on behalf of CBS News by SSRS of Glen Mills, PA.  Phone numbers were dialed from samples of both standard land-line and cell phones.