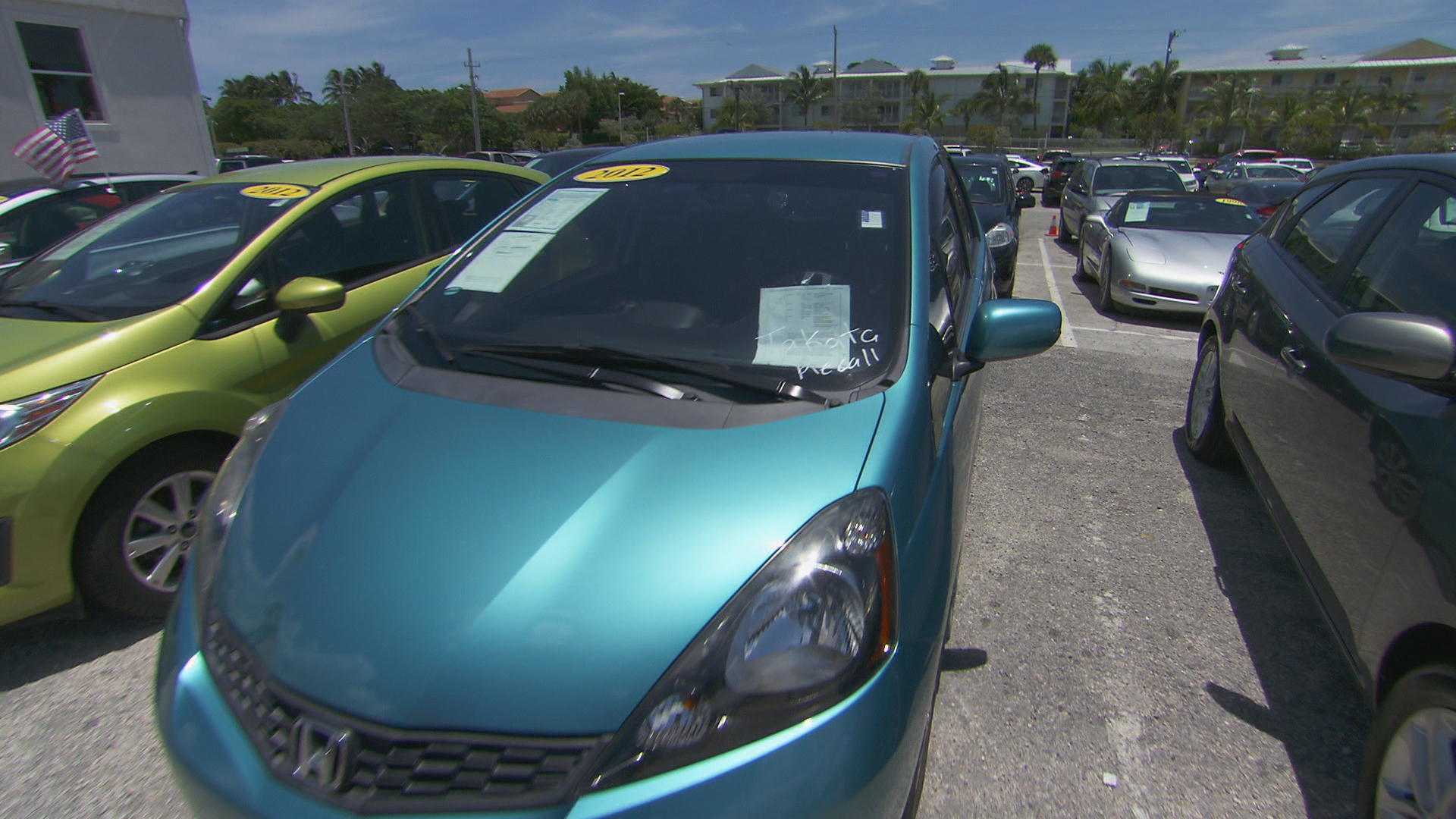 Auto safety regulators are escalating an investigation into another potentially deadly problem with airbag inflators that may explode. The ARC airbags have been linked to two injuries in the U.S. and a recent death in Canada.

As many as 8 million vehicles in this country could be affected. A "CBS This Morning" investigation found that used cars with faculty Takata airbags and other serious defects are still sold for sale around the country. One car dealer saw our undercover shopping investigation at used car dealers, where we found cars with unrepaired safety defects being sold, and no law requiring dealers to tell consumers about recalls.

Now, the dealer agrees this is a problem and is pushing for a law against selling those cars, reports CBS News correspondent Anna Werner.

Earl Stewart believes recalls should be made obvious to shoppers, so at his Toyota dealership near West Palm Beach, any used cars for sale with defective Takata airbags are clearly labeled on the windshield.

The notice posted underneath even tells a shopper that these defective airbags may injure or kill the driver.

"Our purpose is to be bold and unmistakable, clear and conspicuous," Stewart said.

That's the opposite of what we found in our undercover investigation. Not only were the cars we saw not labeled, but salespeople either didn't tell us about recalls, or didn't even know about them. But Stewart contacted us after he saw our story.

"Were you surprised by what you heard those salespeople saying?" Werner asked.

"No, it was exactly what goes on every day," Stewart said.

Stewart even had his own "mystery shoppers" check on some Florida car dealers, to see whether they'd disclose Takata airbag recalls.

"We called on the car that was advertised and they denied that that car had a safety recall - all 20," Stewart said.

Not one. He said with no law requiring disclosure, salespeople aren't inclined to do it.

"Is a salesperson that feeds his family based on commission going to look the customer in the eye and say, 'This has got a potentially deadly recall.' They don't have to do it," Stewart said. "They feel like, 'Why should I? It's going to cost a sale.'"

Stewart said he still sells the cars to keep up with competition. But given the dangers, we wanted to know why he's selling them at all.

"How are you going to feel if one does explode in a car that someone bought from you here -- even with disclosure -- and they are severely injured or killed?" Werner asked.

"I would feel absolutely terrible. And I feel like I'm caught, I'm stuck, I don't have a choice," Stewart said. "I'm doing all I can and that's not enough. There's got to be a law. They've got to make it illegal."

For that to happen, Stewart said he needs the support of the Florida Automobile Dealers Association. Their president, Ted Smith, told us it's under discussion, but they want manufacturers to take financial responsibility.

"So Is there an answer? Absolutely. But the answer doesn't have to come from the consumer or the dealer. It should come from the automaker," Smith said.

"Is that passing the buck?" Werner asked.

"No. It's assigning the responsibility where it belongs," Smith said.

One of the manufacturers' associations told us "automakers work individually with their franchises and in every instance the dealer is compensated for their work." But for now, the cars are still being sold all over the country.

"How can you possibly sell a car to a customer, that you know has got a safety recall that could potentially kill that customer? How can that be? It has to be illegal. It has to be," Stewart said.

But now, it turns out one of the places you won't find cars with serious safety recalls being sold now is Earl Stewart's own dealership. He told us our interview prompted him to rethink what he is doing, and he's now stopped selling any cars with open recalls linked to deaths or injuries -- which means he is currently holding back more than 30 cars. He estimates that this could cost him half a million dollars by the end of the year.