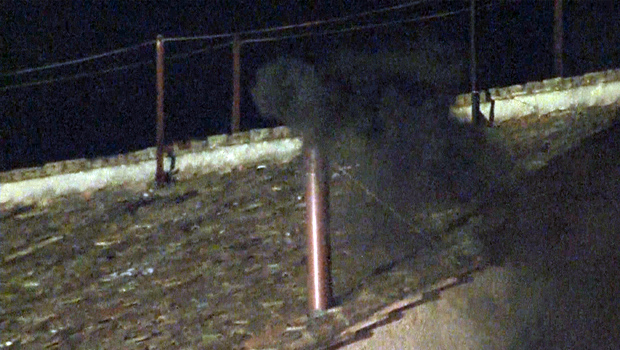 VATICAN CITY The 115 Catholic cardinals tasked with choosing the ancient Roman church's new leader signaled Tuesday evening with a puff of black smoke that they will need at least another day to decide on the right man for the job.

Hours after they isolated themselves in one of the world's most iconic chapels for the first day of the papal conclave -- the ritualistic voting process that will eventually see them elect the next supreme pontiff if the Catholic Church, they burned their first set of voting ballots, sending the smoke up into the air over the Sistine Chapel for hundreds of people gathered in St. Peter's Square to see. Had the smoke been white, it would have meant a pope had been elected.

Earlier Tuesday, each cardinal elector walked in succession up to a bible, placed a hand on top of it and swore an oath in Latin. All non-cardinal electors began streaming out of the ornate chapel after the order "extra omnes" was given, translating literally to "out, everybody." The doors were closed, and the conclave was underway. The actually hand-written voting took place completely in secret. The only information that will be known about the result of the first evening's vote is that no one man garnered 77 of the 115 votes, the absolute majority required to win the papacy.

There is no deadline for the cardinals to elect a new pope -- the process will take as many days as necessary to achieve a winner. The world will know that the 266th pope has been elected only when the white smoke does flow out of the Sistine Chapel chimney and a Vatican bell chimes to herald the news.

Tuesday morning, the so-called "princes of the Catholic Church" began with a pre-conclave Pro Eligendo Pontificate Mass in St. Peter's Basilica at the Vatican.

Torrential downpours in St. Peter's Square kept the number of faithful and curious low, as inside the Basilica, Angelo Sodano, dean of the College of Cardinals, asked his fellow cardinals "to cooperate with the Successor of Peter, the visible foundation of such an ecclesial unity."

Sodano's appeal for unity came 12 days after the first resignation of a pope in almost 600 years, and hinted at the daunting task facing the new Catholic leader: to steer the Church carefully out of an era marked by scandal and allegations of infighting and mismanagement.

Pope Benedict XVI's resignation exacerbated the problems the Church has been attempting to deal with quietly for more than a year. It sparked speculation that the theft and publication of private documents from the pontiff's own desk, which revealed the level of corruption and poor business practice in the Vatican government, might even have catalyzed his decision to step down.

In his wake, the now-Pope Emeritus Benedict left a Church divided, by many accounts, between the Vatican's inner-circle of prelates who dominate its bureaucracy, known as the Curia, and cardinals from outside that circle who feel, perhaps more keenly, pressure from their congregations and the world at large to drag the 2,000 year old institution into the 21st century.

Cardinals from the Americas, Asia and Africa have indicated that it is time for change, throwing around words like "transparency" and "openness" which may make some of their colleagues in the Church who cherish its long-entrenched tradition of secrecy uncomfortable.

Even before the conclave began the cardinal electors -- by Church rules all cardinals under the age of 80 who are physically able to attend -- had already spent a week discussing the qualities the new pontiff should possess, and whom among them they believe is best suited to the task.

Indications are that the cardinals struggled to agree on the key characteristics a new pontiff should possess. The divide reportedly emerged between cardinals focused on finding a new pope with the oratory gifts and persona to swell the estimated 1.2 billion headcount of Catholics around the world right now, and those who more interested in a man with the temperament and managerial skills to get the Church bureaucracy and finances in order. There is not thought to be one man who possesses all of those qualities in unison, leaving the field of potential pontiffs, or "papabili," wide open.

CBS News correspondent Mark Phillips reports that, oddly, an Italian -- Cardinal Angelo Scola -- has surfaced as the champion of the reformist camp supported by many non-Italian cardinals, those who seem to want to overhaul the way the Church runs itself. Conversely, a Brazilian -- Odilo Scherer -- is a traditionalist and supported by the largely-Italian faction which would prefer to leave the Curia to go about its business more or less as usual.

Neither man, reports Phillips, is thought to have enough votes to achieve the required two-thirds majority in the early balloting, and there are a lot of people who could slip through the middle as votes shift. It's happened before.

"This time around, there are many different candidates, so it's normal that it's going to take longer than the last time," Chile's Cardinal Francisco Javier Errazuriz told The Associated Press, adding an oft-repeated claim that "there are no groups, no compromises, no alliances, just each one with his conscience voting for the person he thinks is best, which is why I don't think it will be over quickly."

Beginning Wednesday morning, the cardinals will hold two rounds of voting, with two ballots each, every day until a single candidate reaches the 77-vote threshold.