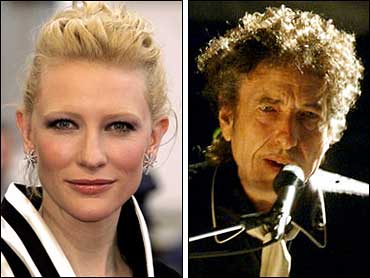 Oscar winner Cate Blanchett, who has portrayed Queen Elizabeth and Katharine Hepburn, will add another legend to her resume: Bob Dylan.

The 37-year-old Australian actress is one of seven actors to play Dylan at various stages of his career in the biopic, "I'm Not There," tentatively scheduled for release next year. She'll portray a specific aspect of Dylan's personality, embodied by an androgynous singer-songwriter character named Jude, according to Killer Films, the movie's production company.

The movie will be directed by Todd Haynes, who helmed 2002 movie "Far from Heaven" and 1998's "Velvet Goldmine," about rock icon David Bowie.

Blanchett will next be seen in the upcoming dramas "Babel," opposite Brad Pitt, and "The Good German," alongside George Clooney.