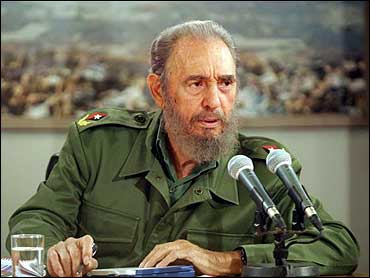 Cuban President Fidel Castro Monday night challenged Forbes magazine to put its money where its mouth is. "If they can prove that I have a bank account abroad, with $900 million, with $1 million, $500,000, $100,000 or $1 in it, I will resign," he declared in a television appearance.

The Cuban leader, surrounded by several of his close collaborators, usurped regular TV programming for four hours to refute a story in the May 22 edition of Forbes, "Kings, Queens and Dictators." In it, Forbes alleges Castro has a personal fortune of $900 million. That's $400 million more than the magazine attributes to Queen Elizabeth.

"If they prove that I have a single dollar, I'll resign my post … there will be no need for plans or transitions …," stressed Castro, referring to the Bush Administration's Cuba Transition Commission, established last year to hasten the end of Castro's regime, now in its 47th year. Any day now, that Commission is expected to announce new regulations to further tighten the economic and travel embargo against the communist island.

For its part, Forbes cites unnamed former Cuban officials who "insist Castro, who travels exclusively in a fleet of black Mercedes, has skimmed profits" from a network of state-owned companies for years. These, according to the article, include the Havana Convention Center, the Cimex retail corporation and a top-of-the-line pharmaceutical company that exports vaccines.

To estimate Castro's net worth, the magazine used "a discounted cash flow method to value these companies and then assume a portion of that profit stream goes to Castro."

The magazine added it has heard rumors Castro has salted away a percentage of these companies' profits over the years in Swiss bank accounts, although it offered no proof of these secret stashes.

The article asks, "What do Cuba's fatigue-wearing president Fidel Castro and Monaco's playboy bachelor Prince Albert have in common? Not much other than lofty positions and vast fortunes."

Castro denies this. He claims his net worth is zilch and that he earns a salary of just 900 Cuban pesos a month. (The Cuban peso has no value on the international market but has a domestic value that makes his salary equivalent to $36 in American currency.)

"It is so ridiculous to say I have a fortune of $900 million, a fortune with no heirs. What would I need all that money for, if I will soon be 80 years old?" he asked.

When Forbes included him on its 2005 list with an estimated fortune of $550 million, he threatened to sue the magazine. The current edition mentions that Castro disagrees with their statements about him.

In the case of Castro, says Forbes, wealth comes from his position of power. "And the lines often blur between what is owned by the country and what is owned by the individual," claims Forbes. The article admits however, that "these estimates are more art than science."

That's why Castro appears as wealthier than Queen Elizabeth. In her case, Forbes decided not to count Buckingham Palace or the crown jewels as personal possessions but as belongings of the British nation.

Furthermore, the information provided on Castro's wealth is notably skimpy compared with the amount of information Forbes provides for the others on this list.

To bolster his counterattack, Castro ceded the floor to several members of the government hierarchy, including Central Bank President Francisco Soberon, who spent much of his time attacking the magazine's owner Steve Forbes as an ultra right-winger who worked with former Presidents Ronald Reagan and George Bush to destabilize the old European socialist bloc.

Describing the article as pandering to the CIA and the Bush Administration, Soberon alleged the profits from the companies referred to go right back into the island's economy and into Cuba's free health and education systems, as well as for science, security, and defense.

As further proof of Castro's disinterest in wealth and material possessions, City of Havana historian Eusebio Leal said that between 1991 and 1995 — the height of the island's economic crisis — he was given the job of distributing more than 11,000 gifts the Head of State had received from 133 countries. These ranged, he said, from paintings, jewels, ivory, valuable tapestries, furniture and rugs to antique weapons and clothes.

Leal reported distributing many of the gifts to museums and cultural centers across the island, while clothing went to old age homes run by the state and by the church. In all cases, according to Leal, Castro insisted he not be cited as the source of these donations.

Castro made was ranked No. 7 on the Forbes list, right behind Prince Albert, whose fortune is estimated at $1 billion. Ahead of them both are five Arab Gulf kings and sheiks.
By Portia Siegelbaum