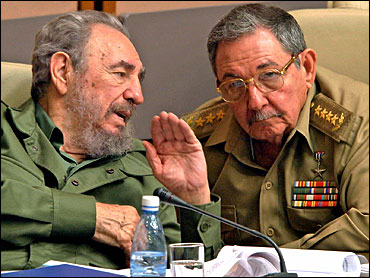 Fidel Castro said Tuesday he was consulted on the sweeping leadership changes by his brother Raul's government and that two of the ousted officials had been seduced by "the honey of power."

The article published on a government Web site gave the first official hint of why at least two powerful officials were removed in the abrupt shakeup - Cuba's largest in decades.

The move was widely seen as Raul Castro putting his personal stamp on the government he inherited from Fidel Castro a year ago. But the elder brother wrote that he had been consulted about the changes and said the "two most mentioned" had been seduced by "the honey of power."

Though he did not name them, press accounts focused on the removal of Foreign Minister Felipe Perez Roque and the removal of Vice President Carlos Lage from his post as Cabinet secretary. Twenty other officials shifted, removed or promoted.

Castro did not describe what offenses the men might have committed, but said their dismissal "was absolutely not for a lack of personal valor."

"There was another reason. The honey of power, for which they had not sacrificed at all, awoke in them ambitions that led to an undignified role," he wrote.

Castro also dismissed suggestions that the changes showed a shift from "'Fidel's men' to 'Raul's men."'

"The new ministers who were just named were consulted with me, even though there was no law requiring those who named them to do that," Castro wrote.

Monday's announcement was more wide ranging than expected and is bound to cause some unease until the population sees what it means for them, reports CBS News producer Portia Siegelbaum from Havana. The changes are bound to be well received if they lead to reforms in the economy.