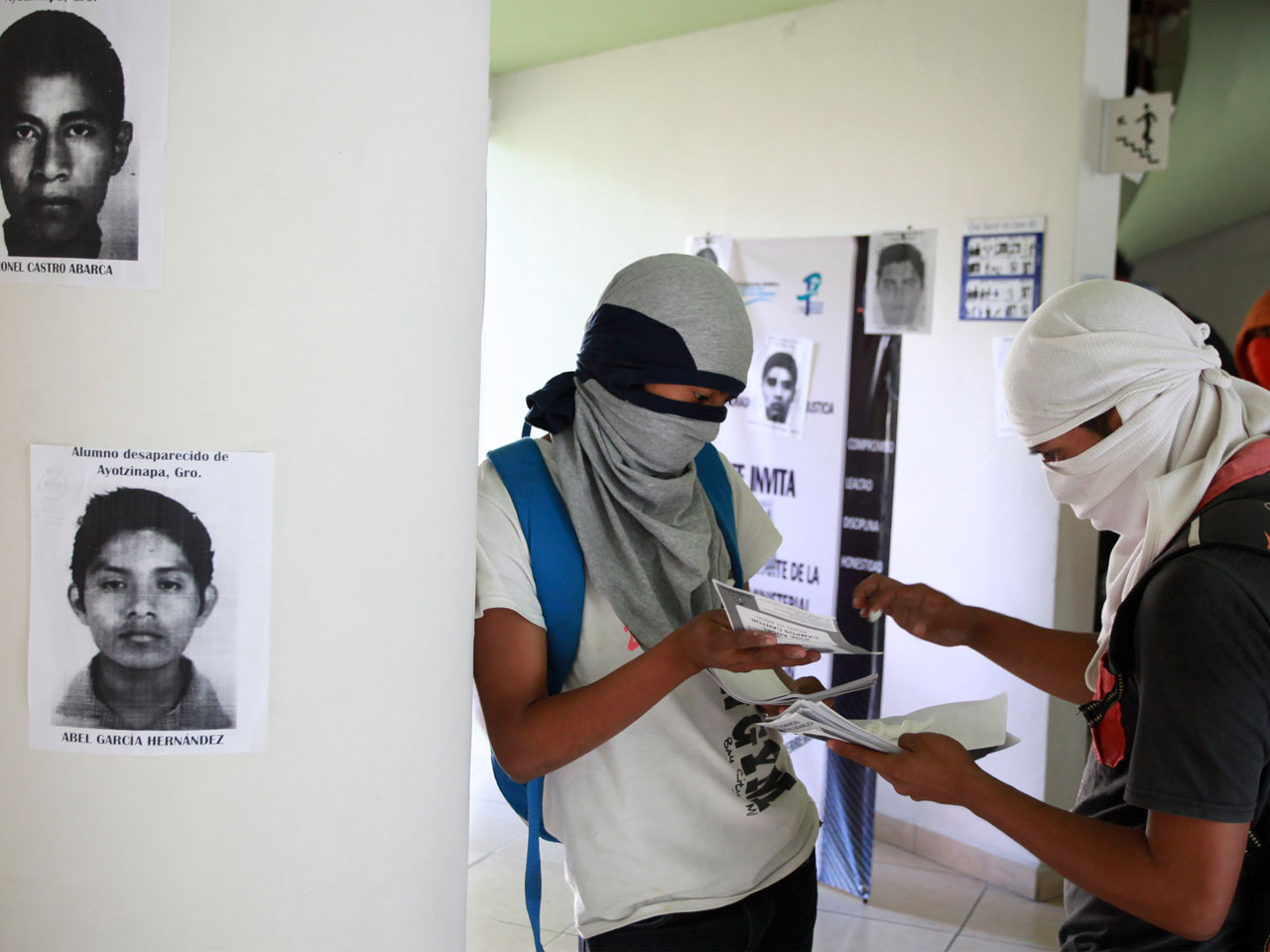 IGUALA, Mexico - On the day 43 students disappeared in this southern Mexican town, the mayor's wife was giving a speech to local dignitaries on family social services.

In another town, it could have been a normal scene. But tough-looking civilians guarded Maria de los Angeles Pineda Villa, a woman with alleged family ties to organized crime. A police force that state and federal officials accuse of being infiltrated by drug gangs patrolled the streets.

Into this combustible mix came the students from a radical rural teacher's college that had defied drug cartel extortion in the past. Well-known for blocking highways and other protests, they arrived with plans to solicit donations from passers-by.

Many never made it back home after the Sept. 26 police attack that killed six and injured at least 25. Officials are conducting DNA tests to determine if some of the students are among 28 charred bodies found last weekend in freshly covered mass graves.

Iguala Mayor Jose Luis Abarca is now a fugitive, and state officials have arrested 22 city officers. His wife's whereabouts are unknown. The possible massacre has focused attention on the extent to which local police forces such as Iguala's are permeated by organized crime.

Pineda, the mayor's wife, is from a family with known ties to the Beltran Leyva cartel. Prosecutors had identified her late brother, Alberto Pineda, as a main lieutenant in the cartel. He and another brother, Marco Pineda, both on former President Felipe Calderon's most-wanted list, were killed by rivals in 2009.

Another brother, Salomon Pineda, was released from prison last year and is believed to be running the Guerreros Unidos cartel in Iguala, an offshoot of the Beltran Leyva group, according to local media.

"Everyone knew about their presumed connections to organized crime," Alejandro Encinas, a senator from the mayor's Democratic Revolution Party, told The Associated Press. "Nobody did anything, not the federal government, not the state government, not the party leadership."

President Enrique Pena Nieto ordered a special federal police force to take over Iguala as his top security officials rushed to contain a smear on the image of stability and falling crime rates that they've projected to the outside world.

Jose Miguel Insulza, secretary general of the Organization of American States, said Tuesday that he is deeply concerned about the disappearances and murders, which he said, "have brought grief not only to the Mexican people but to all the countries of the Americas."

The chief prosecutor for Guerrero state, Inaky Blanco, said suspects have testified that as many as 30 members of the local police force were members of the Guerreros Unidos drug gang.

The students were ending their fund-raising and meeting up to return home about the same time Pineda was giving an annual state-of-the agency address. State officials say local police went on the attack, shooting at the buses students had hijacked for their return, as well as innocent bystanders in other vehicles. At least six people were killed and more than 25 wounded.

Javier Monroy, an activist in Chilpancingo for the families of the disappeared, said the brutality of the attack "made no sense," but could have been caused by Guerreros Unidos who thought the students were going to disrupt Pineda's speech.

Blanco said the imprisoned municipal police deny killing anyone, but had bloodstains in the back of their pickup trucks. One policeman admitted handing over at least 10 detained students to "people he didn't know," Blanco added.

Security camera footage showed non-uniformed men forcing people into the back of a pickup truck, as others ran to escape.

One of them, Julio Cesar Mondragon, ignored his colleague's entreaties to take refuge in the home of a local resident and kept running, said Vidufo Rosales, a lawyer for the families of the missing students.

He was later found dead on the side of the road, the skin stripped from his skull.

Blanco said prosecutors later detained an alleged Guerreros Unidos gang member, who confessed to taking 17 of the students to a hillside outside of town "where they had clandestine burial pits" and killing them on order from a drug gang boss.

AP journalists visited the burial pits on a wooded hillside. They are a mile (1.5 kilometers) up a narrow, muddy path from the nearest house, indicating that the victims must have walked to their death. It would have been nearly impossible for the killers to drag dead bodies up the steep path.

The students may have expected beatings, but probably never expected they would be executed, said one professor at the teachers' college who asked not to be named for fear of reprisals suggested.

"We've lived with threats for decades, but nothing like this had ever happened," the professor said.

The drug gang's involvement may have introduced a volatile new element into what has been a decades-long conflict between governments and the radical teachers' colleges.

What is clear is that Guerreros Unidos remains present and defiant in Iguala.

On Monday, the same day officers from a special new federal police unit set up positions at the city hall, the drug gang hung banners threatening retaliation if the 22 imprisoned police weren't released.

"You have 24 hours ... then we begin to name the people in the government who support us," one read.