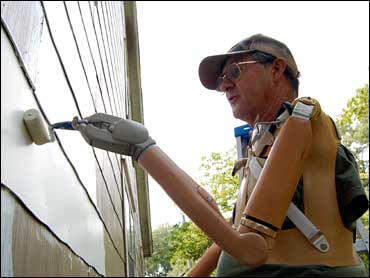 Jesse Sullivan has two prosthetic arms, but he can climb a ladder at his house and roll on a fresh coat of paint. He's also good with a weed-whacker, bending his elbow and rotating his forearm to guide the machine. He's even mastered a more sensitive maneuver — hugging his grandchildren.

The motions are coordinated and smooth because his left arm is a bionic device controlled by his brain. He thinks, "Close hand," and electrical signals sent through surgically re-routed nerves make it happen.

Doctors describe Sullivan as the first amputee with a thought-controlled artificial arm.

Researchers encouraged Sullivan, who became an amputee in an industrial accident, not to go easy on his experimental limb.

"When I left, they said don't bring it back looking new," the 59-year-old Sullivan said with a grin, his brow showing sweat beneath a fraying Dollywood amusement park cap. At times he been so rough with the bionic arm that it has broken, including once when he pulled the end off starting a lawnmower.

That prompted researchers to make improvements, part of a U.S. government initiative to refine artificial limbs that connect body and mind. The National Institutes of Health has supported the research, joined more recently by the military's research-and-development wing, the Defense Advanced Research Projects Agency (DARPA). Some 411 U.S. troops in Iraq and 37 in Afghanistan have had wounds that cost them at least one limb, the Army Medical Command says.

Although work that created Sullivan's arm preceded the research by DARPA, he said he's proud to test a type of bionic arm that soldiers could someday use. "Those guys are heroes in my book," he said, "and they should have the best there is."

"We're excited about collaborating with the military," said the developer of Sullivan's arm, Dr. Todd Kuiken, director of neuroengineering at the Center for Artificial Limbs at the Rehabilitation Institute of Chicago, one of 35 partners now in a DARPA project to develop a state-of-the-art arm.

Sullivan's bionic arm represents an advance over typical artificial arms, like the right-arm prosthesis he uses, which has a hook and operates with sequential motions. There is no perceivable delay in the motions of Sullivan's flesh-colored, plastic-like left arm. Until now, it has been nearly impossible to recreate the subtle and complex motion of a human arm.

"It is not as smooth as a normal arm, but it works much smoother than a normal prosthesis," Kuiken said.

Sullivan lost his arms in May 2001, while working as a utility lineman. He suffered electrical burns so severe that doctors had to amputate both his arms at the shoulder.

Seven weeks later, due to what Sullivan calls being in the right place at the right time, he was headed to meet the Chicago researchers.

"Jesse is an absolutely remarkable human being, with or without his injuries," Kuiken said.

Sullivan said his bionic arm isn't much like the one test pilot Steve Austin got in the '70s TV series "The Six Million Dollar Man." "I don't really feel superhuman or anything," he said.

"It's not magic," added his 4-year-old grandson, Luke Westlake, as he placed a nut in Sullivan's grip and challenged Paw-Paw to crack it open.

Not magic but high-tech science makes the bionic arm work. A procedure called "muscle reinnervation," developed by Kuiken and used on five additional patients so far, is the key.

For Sullivan, it involved grafting shoulder nerves, which used to go to his arms, to his pectoral muscle. The grafts receive thought-generated impulses, and the muscle activity is picked up by electrodes; these relay the signals to the arm's computer, which causes motors to move the elbow and hand, mimicking a normal arm.

Kuiken added: "Basically it is connecting the dots. Finding the nerves. We have to free the nerves and see how far they reach" and connect to muscles.

About three months after the surgery, Sullivan first noticed voluntary twitches in his pectoral muscle when he tried to bend his missing elbow, the institute said. By five months, he could activate four different areas of his major pectoral muscle.

When Sullivan's chest was touched he "had a sensation of touch to different parts of his hand and arm," the institute said. "The patient had substituted sensation of touch, graded pressure, sharp — dull and thermal sensation."

Sullivan said of the thought-controlled arm: "When I use the new prosthesis, I just do things. I don't have to think about it."

Kuiken describes the procedure on Sullivan as the first time such a graft has been used to control an artificial limb.

Gregory Clark, associate professor of bioengineering and prosthetics researcher at the University of Utah, agreed, adding that a conventional prosthetic limb is "limited in a number of ways in the types of movements. Moreover, it can do only one of those movements at any particular moment."

Clark said a natural arm is capable of 22 discrete movements. Sullivan's bionic limb is capable of four right now, though researchers are working to make them better.

Sullivan said his bionic arm allows him to rotate his upper arm, bend his elbow, rotate his wrist, and open and close his hand — in some instances simultaneously.

He and Kuiken were set to attend a Washington, D.C., news conference Thursday with Claudia Mitchell, the first woman to receive the bionic arm. The 26-year-old Mitchell was injured in a motorcycle accident after she left the Marines in 2004.

Trying his new arm at increasingly challenging tasks, Sullivan acknowledges he has good days and bad ones.

"At first, I couldn't watch when he tried doing this stuff," said Sullivan's wife of 22 years, Carolyn.

She said she first thought after the accident that he was going to die. She gave up her catering business to tend to him around the clock.

But eventually he forced her to occasionally run errands and leave him alone.

"He finally got mad and yelled at me and told me to go to the store," she said, laughing.

Enormous lifestyle adjustments that the injuries and rehabilitation required were not as hard as might be expected, she said.

"For some reason, we just sort of rolled into it. I just knew he wasn't going to let anything keep him down," she said.

She said medication helps control his pain, and sometimes he resorts to self hypnosis. "They taught him how to do that," she said, adding she doesn't consider herself to be a caretaker.

"I do all the yard work," Jesse Sullivan said. "I take out the garbage."

He can even hold a fork to eat.

And there's another task the bionic grandfather of 10 looks forward to mastering: casting a fishing line.

Just around the bend: A brave new driverless world