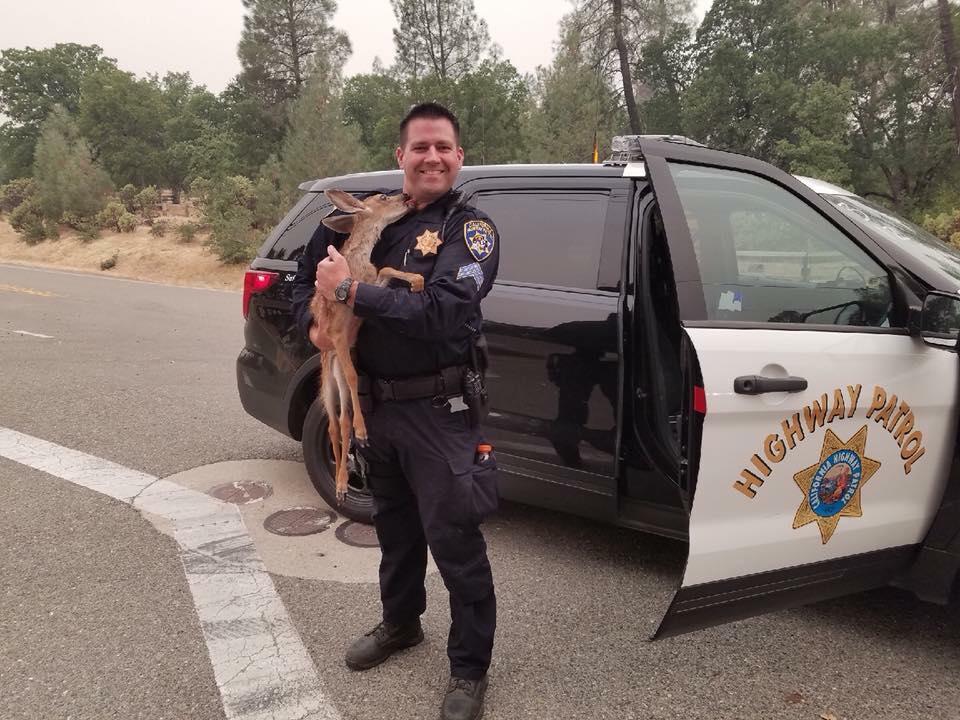 Social media users are "fawning" over a photo of a California Highway Patrol officer and a baby deer that he saved from a raging wildfire.

A California Highway Patrol officer was photographed holding the fawn he helped evacuate from the deadly Carr Fire, which has been burning for days near Redding, in Northern California. In the photo, the fawn appears to thanking Sgt. Fawson with a "kiss." The deer is sticking her tongue out and gently touching the officer's cheek. Both CHP San Francisco and CHP Redding shared the sweet photo on social media, and it has provided a moment of good news during an otherwise dark time for Northern California.

The photo has been picked up by several media outlets and has gone viral online. CHP Redding says the fawn is just one month old and will be cared for by a wildlife rescue. When the officer found the baby deer, it was alone and there was no sign of its mother, the Facebook post read.

CHP San Francisco's post thanked Cal Fire and the other agencies proving aid, saying the are "truly the bravest" for battling the blaze.

The Carr Fire has forced tens of thousands of people to flee their homes and has killed at least six people. Two firefighters were killed battling the blaze. And two young children and their great-grandmother who had been unaccounted for were confirmed dead Saturday.

The fire slowed down Sunday after days of explosive growth, giving officials hope, but it has already scorched nearly 150 square miles. Officials said there were more than 150 engines on the way from out of state to help.