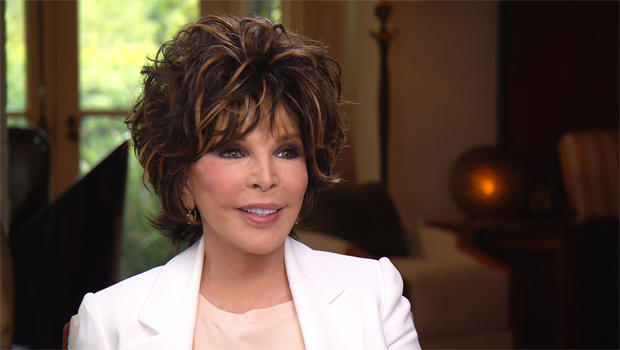 “That’s What Friends Are For” was a huge hit in 1985 for Dionne Warwick and Friends ... and for lyricist Carol Bayer Sager.
Fans never seem to tire of playing her songs, as we hear now from Rita Braver:

Her face may not be familiar, but her songs certainly are, such as Carly Simon’s

“Nobody Does It Better”; Melissa Manchester’s “Don’t Cry Out Loud”; and Dionne Warwick and Friends’ “That’s What Friends Are For.”

Carole Bayer Sager has been writing memorable lyrics for more than half a century.

When asked what she feels makes a good lyric, Sager replied, “A good lyric for me is one that touches me, and therefore I feel it’ll touch you.”

At age 69, she tools around her lush Los Angeles estate in a custom-designed cart; and she’s got a home studio full of gold and platinum records, sung by the likes of Neil Diamond, Barbra Streisand and Celine Dion.

“There’s more records but I ran out of space,” Sager laughed.

But, she says, growing up in Manhattan, she was a chubby, insecure kid with a domineering mother: “She told me she had to sew two Girl Scout uniforms together for me to get into one, at about that awkward age of 12,” Sager recalled. “And she had a picture of me on the refrigerator, like that, and it said, ‘You sure you want this fatty?’”

Music was her refuge.  She wrote songs all through high school and college, but took a job as a teacher … until 1966, when a song she and a friend had written, “A Groovy Kind of Love,” became a hit!

She started writing full-time.  But it would be almost a decade until she hit the charts again, teaming up with a then-little-known singer-songwriter named Melissa Manchester.

Braver asked, “What was it like to have a hit again after nine years?”

But Sager’s personal life was another story, as her marriage to businessman Andrew Sager (whose name she still uses) unraveled. She threw herself into writing, and then in 1975 a mutual friend suggested she try working with a young award-winning composer, Marvin Hamlisch.  He told her he had been commissioned to write a song for the James Bond film “The Spy Who Loved Me.”

Sung by Carly Simon, the song got an Oscar nomination. So did their theme for “Ice Castles,” called “Through the Eyes of Love.”

Sager and Hamlisch became a couple, and together went on to write a hit Broadway musical with Neil Simon. “Unbelievable,” Sager said.

Based on the quirky romance between Sager and Hamlisch, it was called “They’re Playing Our Song.”

And Sager borrowed the title for her new memoir, “They’re Playing Our Song,” published by Simon and Schuster (a division of CBS). It details her breakup with Hamlisch.

But the next chapter of her life was more complicated: Her relationship with famed songwriter Burt Bacharach, nearly 20 years her senior:

“I think I fell in love immediately with the way he speaks,” she said, imitating the half-whispered rhythms that, she says, “pulls you in, holds you there dangling.”

They were married in 1982, and there were plenty of good times: the Oscar they won for “Arthur’s Theme” (written with Peter Allen and Christopher Cross); the birth of their son, Christopher; glamorous pals like Michael Jackson and Elizabeth Taylor; and the Grammy for “That’s What Friends Are For.”

But Sager says, the bad times soon outweighed the good, the years with Bacharach described as being in an abusive relationship without any physical signs of abuse.

“Yes, ‘cause he couldn’t give me what I needed. I didn’t have the self-esteem to say, ‘This isn’t working for either of us.’”

Braver said, “In one of the most honest things I have ever read in a memoir, you write that at one point he actually told you that sometimes when you touched him, it made him feel ‘sick, almost nauseated.’ That must not have been easy to write.”

“You think he’s a narcissist, that’s what you say over and over again.”

Bacharach ultimately left Sager for another woman, and they divorced in 1991.

Sager did not give up on love. In 1996 she married Bob Daley, a former CBS executive who went on to run Warner Brothers and the Los Angeles Dodgers.

“I think I know her better than anybody in my whole life. I know everything about Carole,” Daley said. “And I love her.”

“Warts and all!” Sager added.

Braver said to Sager, “You always said you feared that you were unlovable. Do you think he’s changed that for you?”

“Absolutely,” she replied. “I do feel loved.”

And a new passion for painting has helped her cope with some old issues: “I started to paint the foods I couldn’t eat, that were forbidden foods as a kid, and all the foods I’d like to eat!” she said.

But she hasn’t given up the art of music. “Stronger Together,” a song Carole Bayer Sager co-wrote, closed out the Democratic National Convention in July.

“I do feel so extraordinarily grateful that I got to do what I love to do in this life, and I was rewarded for it,” Sager said. “I would have done it for nothing.”

And ending worthy of a love song.