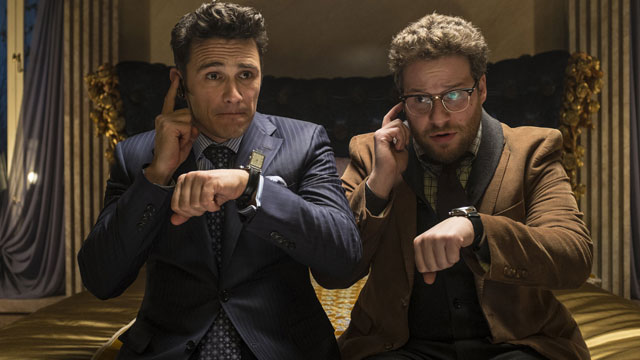 Carmike Cinemas has decided to cancel its planned showings of "The Interview" in the wake of threats against theatergoers by the Sony hackers.

Sony Pictures Entertainment told theater owners on Tuesday that it would be supportive of their individual decisions on whether or not to show the film, which is still set for a Christmas release, according to multiple reports.

The late developments came just hours after the hackers released a data dump that they're calling a "Christmas gift." Included in the latest breach are emails from Sony Pictures co-chair and CEO Michael Lynton, as well as specific threats against patrons of the comedy, which depicts an assassination attempt against North Korean leader Kim Jong Un.

In a chilling message invoking the memory of 9/11, the hackers urged audiences to stay away from venues showing the film.

Carmike Cinemas operates 278 theaters across the country and is the first theater to pull the screenings of the controversial film, according to Hollywood trade publications The Hollywood Reporter and Variety.

The Georgia-based company is the fourth largest cinema chain in the nation, following Regal, AMC, and Cinemark, none of whom commented on their plans for "The Interview" showings.

The controversy surrounding the film has sparked a lot of comments from producers and actors alike.

On Tuesday, producer/director Judd Apatow tweeted about the film:

The Department of Homeland Security has said that there is no credible intelligence to indicate a threat, but is still investigating the message.

The National Association of Theatre Owners had no comment about pulling of the film by its members. Neither Sony nor representatives from Carmike responded to requests for comment.