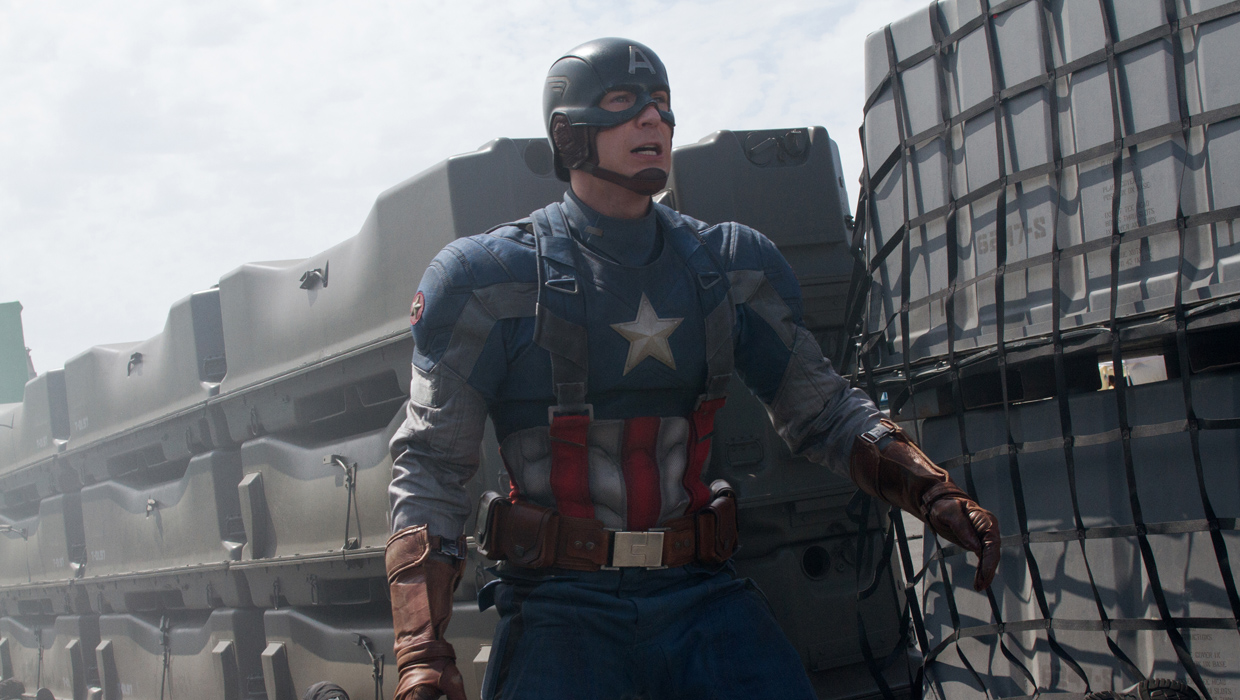 Captain America is back on the big screen this week, when the Marvel superhero suits up for his latest adventure in "Captain America: The Winter Soldier."

The film opens in theaters Friday, and sees Steve Rogers Captain America (Chris Evans) struggling to adjust to his life and role in the modern world as he faces the titular new enemy (the Winter Soldier, played by Sebastian Stan).

This is the third movie featuring the patriotic hero -- following "Captain America: The First Avenger" and then "The Avengers" -- and critics' takes on it have been positive, calling it complex, suspenseful and politically astute.

"[Fans] will not be disappointed in this second entry in the series, which takes the bold (for Marvel) step of reducing CGI spectacle to a relative minimum in favor of reviving the pleasures of hard-driving old-school action, surprising character development and intriguing suspense." - Todd McCarthy, The Hollywood Reporter

"Fight scenes are tense, though occasionally it's hard to tell who's doing what to whom. But they have the bone-crunching crack of realism sometimes lacking in comic book movies. An early car chase involving [Samuel L, Jackson's character, Nick Fury] is spectacularly exciting." -- Claudia Puig, USA Today

"Taking inspiration from such hot-button topics as drone warfare, NSA spying and Wikileaks-style secret sharing, the screenplay by returning writers Christopher Markus and Stephen McFeely is smart but never didactic about situating "The Winter Soldier" in a world where those on both sides of the political aisle have done much to compromise basic human freedoms in the name of defending them." -- Scott Foundas, Variety

"Chris Evans once again makes our hero a compellingly pensive, furrowed-browed demigod. He moves very fast, like a Bruce Lee of bionically enhanced aggression, but Evans lets us see how the forces Captain America is up against are weighing him down. It helps to have Robert Redford on hand, wittily cast as a CIA-spirited S.H.I.E.L.D. leader -- a cutthroat in a suit who drily understands the mathematics of power." -- Owen Gleiberman, Entertainment Weekly

While "The Winter Soldier" succeeds as finely engineered merchandise built to be crowd-pleasing entertainment, for moviegoers and shareholder alike, it has a shelf life that won't last much past its running time." -- Jake Coyle, Associated Press

"'The Winter Soldier' becomes progressively less enjoyable once the plot thickens and a menace looms, as Fury moves one chess piece, while Pierce moves another. Captain America doesn't move much, beyond cars and debris. However appealing, Mr. Evans remains a recessive screen presence, and while it may be a relief that Captain America isn't angst-ridden, he's blandly well adjusted for a guy who, in his last movie, emerged from a decades-long deep freeze." -- Manohla Dargis, The New York Times

"Summer popcorn movies are hereby put on notice to get cracking. "Captain America: The Winter Soldier" is every rousing, whup-ass thing you want in an escapist adventure. And did I detect a hint of depth under the dazzle? A little bit. So why kick a gift horse?" -- Peter Travers, Rolling Stone

Tell us: Are you going to see "The Winter Soldier"?