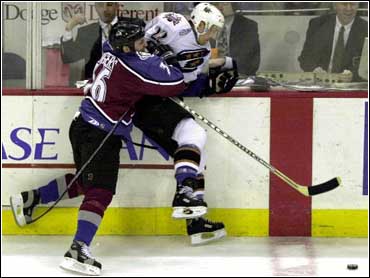 No one can accuse Adam Oates of not squeezing opportunity out of every second on the ice.

Oates and Chris Simon each had a goal and an assist in the second period Tuesday night as the Washington Capitals won a franchise-record ninth straight at home, 2-1 over the Colorado Avalanche.

Oates' 10th goal broke a tie as time ran out in the second period. He took Simon's pass between the circles and wristed a shot past Patrick Roy.

"I can't say I knew it was that close," Oates said. "But I knew we were running out of time."

Oates' assist on Simon's goal gave him 873 for his 15-year career, tying him with Phil Esposito for 14th on the NHL's career list. The two points moved Oates past Bobby Hull into 30th place with 1,171.

Now, a team that once feared going out on the road at this point in the season can't wait to get away from Washington. The home results have spawned a desire to duplicate success.

"It's a different story," Washington's Peter Bondra said. "Confidence makes everybody a little better, especially when you have talent. We're on a roll."

Milan Hejduk scored for the Avalanche, who lost their third straight road game.

Olaf Kolzig made 31 saes as the Capitals improved to 17-4-6 at home. They won only 16 home games last season.

The Avalanche, 1-6-1 in eight road games, were 3-0-1 in their last four against Washington. The Capitals' last victory over Colorado was March 6, 1997.

"We've been struggling on the road there's no rhyme or reason to it," Avalanche winger Brian Rolston.

Washington came into the game with only one power-play goal in 26 chances. After failing to convert two first-period man-advantages, the Capitals were successful on two straight.

Simon broke a scoreless tie 7:32 into the second, scoring his team-high 18th goal on the Capitals' 20th shot. He settled Oates' centering pass with his right skate, then flicked the puck past Roy from the edge of the left circle.

With the Avalanche on a power play, Hejduk tied it by batting in Adam Deadmarsh's rebound at 11:13 for his 26th goal.

Oates restored the lead with time running out in the second and Colorado's Alexei Gusarov off for tripping. Simon, at the right post, sent a sweeping pass back to Oates between the circles. Oates weaved a shot through traffic with 0.1 remaining in the period.

"You wouldn't believe the lift it gives a team," Simon said. "It's a lift for your team and a downer for the other team."

It was the 23rd time Oates has scored against the Colorado franchise his most against any NHL team.