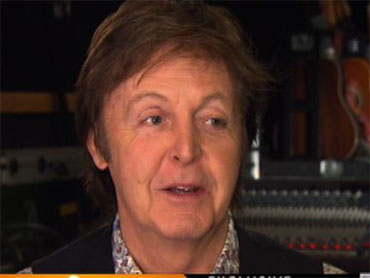 From the streets of Liverpool, England to becoming one of the best-known performers of all-time and being knighted, Paul McCartney is now a Kennedy Center honoree.

And, in an exclusive interview with CBS News Correspondent Jeff Glor, McCartney reflected on his legendary career, which continues full-throttle.

McCartney's been called the most influential composer of the 20th century, and is also its most successful, Glor observes.

His voice cracking, he told Glor, "It's overpowering. And sometimes very emotional. … But I love doing the Beatles stuff. I really do love it. It's -- a lot of it's to do with the fact that people love it. … When I'm singin' the songs, I can sometimes go back in my mind into the studio, and I can be there with John, George and Ringo, and I could be makin' the record. And I'm remembering."

Born on June 14, 1942, McCartney was introduced to music by his father. The accomplished jazz musician gave his son a trumpet, which a young Paul would later trade for a guitar.

McCartney's brother says, from the moment he got the guitar, he was lost. "That was it," Paul agreed. … "And then, rock 'n' roll came in, and then I got a group called The Quarry Men or the Silver Beatles, and then later, The Beatles. And we never looked back."

Charging ahead, the lads from Liverpool took over the British music scene of the early '60s and, in February of 1964, they conquered the world. "Once we got big in America," McCartney says, "that was it. The game was over."

But The Beatles' explosion in popularity was different from what they'd experienced in Britain, McCartney says.

"I think the good thing was that, because we'd had a little bit of practice in Britain at fame -- and we'd gotten really big there, so the Beatlemania was -- was happening there. We got on the plane and we were just -- thought we were getting off at Kennedy Airport and we were just gonna go and do some work on this guy called Ed Sullivan."

Their appearance on "The Ed Sullivan Show" launched The Beatles to unheard of heights in the U.S.

"We'd been told, 'It's crazy there,"' McCartney says. "But we had no idea. So it was a huge sort of explosion.

" … I'll tell you the big thing, though. We had said to our manager, 'We're not going to America until we've got a number one record there." And that was a very canny move, 'cause a lot of English stars had come over who'd been huge in England and had not done anything (IN America), come back a little bit with their tail between their legs. So we said, 'No, you know, we've gotta have something."'

To many music fans, Glor notes, The Beatles had everything. With each new album, they seemed to redefine the word masterpiece.

But as their fame grew, Paul, John, George and Ringo grew apart and, in 1970, the Fab Four went their separate ways.

With the love of his life, Linda, McCartney found new creative ground with the group Wings, and made history once again.

"I'd made it kind of my ambition, once we started a new group with Wings, to make that successful," McCartney says. "I didn't just wanna be sort of a Beatles cover band. I wanted something else. … And once I'd established Wings and had hits with (the group), like 'Band on the Run' and "Live and Let Die,' songs like that, I then thought, 'You know what? It's OK. We can now look back.' … So we gradually started to reintroduce other songs. And it just became more my stuff. My stuff from The Beatles. My stuff from Wings. And now, my stuff from my stuff!"

And now, the songwriter and performer can add Kennedy Center honoree to his already lengthy list of accomplishments.

"The truth was," McCartney revealed, "I didn't actually know how big it was, because in England it's -- it's not known like the Oscars and Grammys and that stuff. It's a very American award. So people over here said, 'No, it's -- it's the big one.' … I think it's probably one of the biggest ones America can confer. … And I'm thrilled to have gotten it."