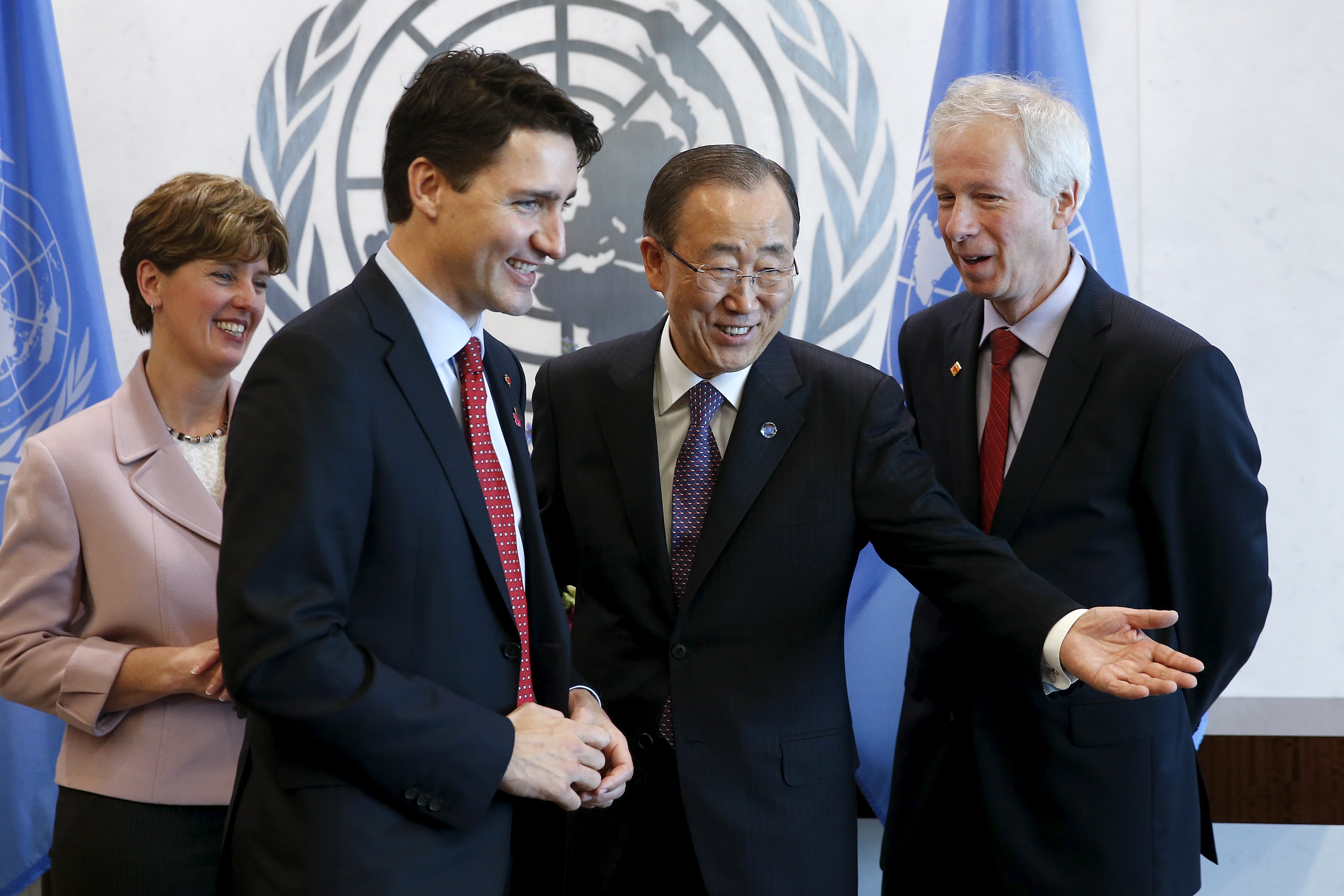 UNITED NATIONS -- Canadian Prime Minister Justin Trudeau came to the U.N. on Wednesday, two weeks after a State Dinner at the White House, to reassert his nation's claim to a place in world affairs, and he underscored it by announcing Canada's bid for a seat on the U.N. Security Council.

"With a renewed commitment to international peace and security, now is the time for our return," Trudeau said Wednesday at U.N. Headquarters, in front of a room packed with diplomats and journalists.

Canada has served six terms on the 15-member council since 1946, but was defeated in its quest in 2010 under the previous administration -- a defeat that cost Canada dearly in its reputation on the world stage.

In this round, Canada will compete against Ireland and Norway for two available seats on the council for the term beginning in 2021.

In all of the meetings at the U.N., Trudeau defined his government's commitment to getting back into a "player" position to try and tackle the crises that have daunted the global body, in large part due to U.S. - Russia divisions.

"We very much welcome Canada's increased commitment to the U.N.," Delattre told CBS News, adding that he was "not surprised" by Trudeau's announcement. "U.N. commitment is part of Canada's DNA."

To underscore Canada's commitment to a greater role in addressing the biggest issues facing the world, Trudeau announced a self-imposed deadline of September this year for his nation to accept 25,000 Syrian refugees.

The announcement was welcomed by U.N. Secretary-General Ban Ki-moon.

"Canada has been a historic partner of the United Nations over the last 70 years -- in peacekeeping, in development, and human rights -- and I think a strong U.N. needs a strong Canada. We hope to see a renewed presence of Canada in peacekeeping and there is a renewed interest to increase their contribution to humanitarian operations," Stephane Dujarric, Ban's spokesman, told CBS News.

"They don't dictate their position, they negotiate their roles," said Ruzicka.

What made Trudeau's visit particularly remarkable was his millennial approach to gender, as he met the head of the U.N. Women group, Phumzile Mlambo-Ngcuka.

"I'm going to keep saying, loud and clearly, that I am a feminist, until it is met with a shrug," the Canadian PM said. He noted that he had fulfilled his campaign promise to appoint a gender-equal cabinet of 15 men and 15 women.

"It's just really, really obvious," he said to raucous applause from the representatives of other member nations. "We should be standing up for women's rights and trying to create more equal societies... Like, duh."

Trudeau said he would return to the U.N. for the climate change signing ceremony on April 22.

"My friends, it's time; it's time for Canada to step up once again," Trudeau said.