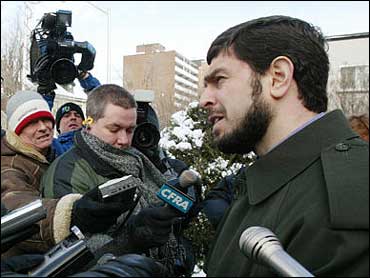 The prime minister apologized Friday to a Syrian-born Canadian and said he would be compensated $8.9 million for Ottawa's role in his deportation by U.S. authorities to Damascus, where he was tortured and imprisoned for nearly a year.

Prime Minister Stephen Harper again called on Washington to remove Maher Arar from its no-fly and terrorist watchlists. He reiterated that Canada would keep pressing the United States to clear Arar's name.

"On behalf of the government of Canada, I want to extend a full apology to you and Monia as well as your family for the role played by Canadian officials in the terrible ordeal that you experienced in 2002 and 2003," Harper told reporters in Ottawa, referring to Arar's wife, Monia Mazigh, and their two children, who now live in British Columbia.

"I sincerely hope that these words and actions will assist you and your family in your efforts to begin a new and hopeful chapter in your lives," Harper said, adding the compensation package would also pay Arar's estimated $1 million in legal fees.

Arar later thanked the Canadian government and his fellow citizens.

"The struggle to clear my name has been long and hard; my kids have suffered silently and I feel that I owe them a lot," he said. "Without the support of the Canadian people, I may never have come home and I would not have been able to stay strong and push for the truth."

Arar's case was an example of rendition, a practice in which the U.S. government sends foreign terror suspects to third countries for interrogation.

He was exonerated in September after a two-year public inquiry led by Associate Chief Justice of Ontario Dennis O'Connor. It found that the Royal Canadian Mounted Police wrongly labeled Arar as an Islamic fundamentalist and passed misleading and inaccurate information to U.S. authorities, which very likely led to Arar's arrest and deportation.

The report said the 37-year-old wireless technology consultant's inability to find work since his return from Syria has had a devastating economic and psychological impact on him and his family.

Arar was detained at New York's John F. Kennedy International Airport in 2002 during a stopover on his way home to Canada from a vacation with his family in Tunisia.

He said he was chained and shackled by U.S. authorities for 11 days for interrogation and then flown to Syria, where he was tortured and forced to make false confessions. He was released 10 months later, with Syrian officials saying they had no reason to hold him further.

A Canadian inquiry determined that Arar was indeed tortured, and it cleared him of any terrorist links or suspicions.

Since then, Ottawa has been demanding a formal apology from Washington, as well as the removal of Arar's name from watchlists. "We think the evidence is absolutely clear and that the United States should in good faith remove Mr. Arar from the list," Harper said.

The U.S. government insists it has reasons to keep him on its watchlists. The issue has grown into an unpleasant diplomatic row between the world's largest trading partners and closest allies, the Canadian Broadcast Company reports.

In February 2006, the U.S. District Court of Appeals dismissed Arar's lawsuit against U.S. government officials, ruling his deportation was protected on national security grounds. His attorneys with the New York-based Center for Constitutional Rights filed an appeal in December.

"We are grateful that the Canadian government has had the humanity to try to right the terrible wrong that was done to Maher," said CCR attorney Maria LaHood. "We still hope the U.S. government will follow Canada's lead."

Sen. Patrick Leahy, D-Vt., chairman of the Senate Judiciary Committee, this month scolded Attorney General Alberto Gonzales for refusing to explain why the United States had sent a Canadian citizen to Syria.

"The Canadian government now has taken several steps to accept responsibility for its role in sending Mr. Arar to Syria, where he was tortured," Leahy said Friday. "The question remains why, even if there were reasons to consider him suspicious, the U.S. government shipped him to Syria where he was tortured, instead of to Canada for investigation or prosecution."

He said the Justice Department intended to respond to his demands next week.

U.S. Ambassador David Wilkins on Wednesday chastized Canadian Public Safety Minister Stockwell Day for continuing to press Washington on Arar. "It's a little presumptuous of him to say who the United States can and cannot allow into our country," Wilkins said.

In a recent letter to Day, Homeland Security chief Michael Chertoff and Gonzales said U.S. files indicate the decision to keep Arar on watchlists is "appropriate."

"Our conclusion in this regard is supported by information developed by U.S. law enforcement agencies that is independent of that provided to us by Canada with regard to Mr. Arar," the letter said, adding that they wished to thank Canada for its cooperation in fighting terrorism.

Rep. Edward J. Markey, D-Mass., condemned the Bush administration for not removing Arar from the watchlists, saying he was "wronged in a terrible way by our government and by the government of Canada."

"I will continue to press the Bush administration to come clean on their policies to outsource torture and to finally bring an end to this horrific and indefensible practice," Markey said.