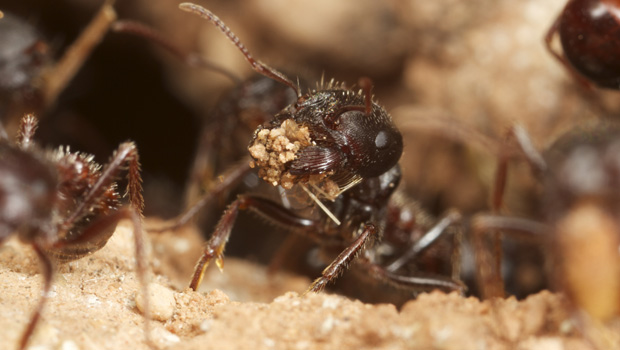 Ants may be some of Earth's most powerful biological climate brokers, a provocative new study claims.

The average ant lives and dies in less than a year, but a long-term experiment tracking the insects' effects on soil suggests they cooled Earth's climate as their numbers grew.

Dorn has discovered that certain ant species "weather" minerals in order to secrete calcium carbonate -- better known as limestone. When ants make limestone, the process traps and removes a tiny bit of carbon dioxide gas from the atmosphere. [See Close-Up Photos of Amazing Ants of the World]

This ant limestone factory is a small-scale version of the massive planetary-cooling process that takes place in the oceans, known as carbon sequestration. Limestones deposited in the ocean hold more carbon than is present in the atmosphere today.

Dorn discovered that ants were powerful weathering agents by tracking the breakdown of basalt sand. At the start of his career, 25 years ago, Dorn buried sand at six sites in the Catalina Mountains in Arizona and Palo Duro Canyon in Texas. Every five years, Dorn has dug up a bit of sand from the sites and measured how much the minerals olivine and plagioclase have degraded from exposure to water, insect activity and chemicals from tree roots.

Dorn's experiment revealed that ants appear to break down the minerals 50 to 300 times faster than sand left undisturbed on bare ground. At the same time, the ants were gradually building up limestone within their nests. Dorn thinks the ants may be scavenging calcium and magnesium from the minerals and using these elements to make limestone. In the process, the insects may trap carbon dioxide, a greenhouse gas, in the rock. The transformation could take place when ants lick sand grains and stick them on the walls of their nests, but Dorn said the process is truly a scientific mystery.

"We don't know if they are licking it or pooping it, or if it's bacteria in the ant's gut or the fungi growing in the colonies," Dorn told Live Science.

The findings don't reveal how much atmospheric carbon might be missing thanks to ants, either. "We're very, very early in the game," Dorn said.

While he's only speculating at this point, Dorn said he thinks the sheer biological mass of ants working in concert could have removed significant quantities of carbon dioxide from the atmosphere since the insects expanded their numbers starting 65 million years ago. Eight ant species are known to secrete calcium carbonate in some form. Ant expert E.O. Wilson, a professor at Harvard University, once estimated the total biomass of ants on Earth is equal to that of humans.

David Schwartzman, a geochemist at Howard University in Washington, D.C., who was not involved with the study, said he finds the idea plausible. "Clearly, more studies on the role of ants and other animals populating soils are needed to broaden our understanding of their significance in global biotic enhancement of weathering," Schwartzman told Live Science.

The aim of study, published July 14 in the journal Geology, was to watch the minerals in basalt dissolve over time.

In general, weathering of minerals plays an important role in trapping and removing carbon from Earth's atmosphere, and Dorn was interested in directly measuring this effect.

"Ants were not the original focus," Dorn told Live Science. "I'm a weathering nerd. What better way to figure out weathering than to observe it in situ?"