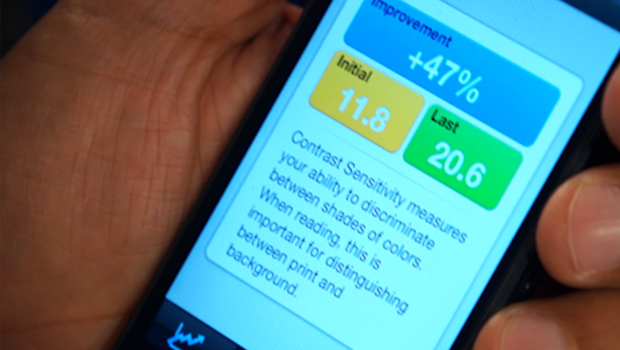 It's practically inevitable: sometime around the age of 40, people start to need reading glasses. Try as they might, there's no avoiding it. Or is there?

The creators of two mobile apps say practicing with their technology can train your eyes to see better, though some eye doctors aren't so sure.

The reason many people eventually need reading glasses is that the lens of the eye loses elasticity with age, and has trouble focusing on nearby objects. The condition is called presbyopia. The loss of flexibility is just a natural side effect of aging.

"It really is just like if you think about our muscles anywhere else in our body, the muscle in our eye just starts to stiffen and fatigue and it is in general around [age] 40," ophthalmologist Michelle Rhee told CBS News.
The first app claiming to have the solution is called GlassesOff. First you take a diagnostic test administered by the app, and then follow its customized training regimen. Three days a week, for 12-15 minutes, you'll go through a series of visual exercises, such as deciphering small gray letters on a gray screen. After two or three months, it claims you can kiss your reading glasses goodbye.
Created by a entrepreneur and a neuroscientist based in Israel, GlassesOff is available for iOS devices. In a 30-person study published in Scientific Reports in February 2012, participants were able to read letters 1.6 times smaller after using the app. Adults ages 40 to 60 years old had the most success. The study also found that users' eye health improved by an average of 8.6 years. The study was co-authored by Dr. Dennis M. Levi, dean of the University of California Berkeley's School of Optometry; he is a scientific advisor to GlassesOff compensated in stock options.
"We wanted to develop the application that can help people empower themselves to improve their reading abilities by improving the way that the brain improves and processes information," said GlassesOff CEO Nimrod Madar. "Until recently it wasn't really possible because scientists didn't understand how to improve the way that the image processing capabilities of the brain actually works."
GlassesOff doesn't claim to cure presbyopia or other age-related eye conditions. Rather, it makes the brain "better able to interpret" information that the eyes are taking in, says Madar.
By improving the brain's ability to process visual information, you improve the ability to read, he added.
It revolves around neuroplasticity. Studies have shown that through training, new connections can be made in the brain so that it can continue adapting to the world around us. In terms of vision, this means that through training, the brain may be able to form new connections that allow it to lucidly process text even when that text is blurred by aging eyes.
Sound too good to be true? Well, it most likely is, says Rhee.
"Human vision quality is determined by the physical eye and the way the brain reads the information that the eye captures," she said. "To think that we can reverse presbyopia or reverse having to wear glasses for myopia and any of those different prescriptions solely on neuroplasticity is just not accurate."
It might not make a huge difference in terms of combatting presbyopia, but brain-training could make a difference for younger people whose eyes are still more elastic.
The second app claiming to improve vision is UltimEyes, designed by a neuroscientist at the University of California, Riverside. Alan Seitz worked with the 2013 UCR baseball team to assess the benefits of "visual training," he explains in a press video.
A psychology professor looking at the season's results found that the training led to a 31 percent improvement in vision, 41 more runs, 4.4 percent fewer strike outs, and 4 or 5 additional wins. He calculated the results using formulas from sports analytics bible "Moneyball: The Art of Winning an Unfair Game."
"The key idea is that you're not changing how the eyes work. You're making the brain more efficient at processing the information from the eyes," Seitz said, echoing the same approach as the team at GlassesOff.
But unlike the target audience of GlassesOff, the players in the UltimEyes study are young, with elastic eye lenses still going strong. Seitz's team created the UltimEyes app based on the program used by the UCR baseball team.
"In our game, the margin of error is so small, that any edge we get can take us over the top," said head coach Doug Smith.