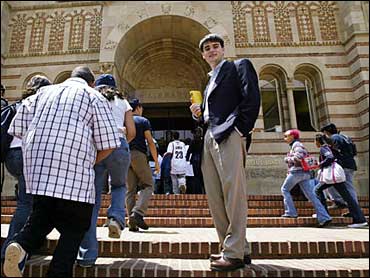 Ben Shapiro isn't the only conservative railing against liberalism on America's college campuses. But right now -- thanks to a marketing campaign taking place mostly in cyberspace -- he's the one getting the most attention.

At 20, Shapiro graduates later this month from UCLA, where he has been best known for caustic columns in the campus paper.

But Shapiro also took careful notes in class, chronicling what he viewed as a pervasive liberal bias by professors who fed mostly unwitting students a steady diet of anti-Americanism.

Now, Shapiro has assembled those notes in "Brainwashed: How Universities Indoctrinate America's Youth" - a book that has won attention even amid the flood of political tracts from both left and right that is saturating the best-seller lists.

The publisher, WND Books, will not release sales figures, and the book has not cracked any overall best-seller lists. But despite little mainstream publicity, it has been among Top 25 hardcover non-fiction bestsellers on Amazaon.com lately, spiking after appearances by the author on conservative talk radio shows.

Shapiro said the big book chains have shown less interest, though several stores said Thursday they have been ordering copies for customers.

On Amazon, customer reviews have been polarized: Fans have called it witty and eye-opening, critics say it is exploitive and unfair.

In some ways, Shapiro is following in the footsteps of William F. Buckley's "God and Man at Yale" (1951) and John LeBoutillier's "Harvard Hates America" (1978). Both, like Shapiro, delighted conservative readers by sharply criticizing the faculties at the elite universities from which the authors had recently graduated.

But in other respects, Shapiro is emblematic of a new generation of sharp-tongued and increasingly confident campus conservatives, many of whom troll Web sites like World Net Daily, freerepublic.com and townhall.com, and write for conservative campus publications.

Intellectually precocious and extremely confident, Shapiro counts better-known columnist and author Ann Coulter as a friend, says he is himself far to the right of Ariel Sharon on Israeli politics, and -- in his book -- calls some of his professors "as red as overripe tomatoes."

"He's fearless," said David Horowitz, a conservative intellectual who has extensively criticized colleges and universities for bias against conservatives. "Usually, there's peer group pressure when you come into a university - you're just a student - that would intimidate most people. He's part of a new generation that you can't intimidate."

Some academic groups say criticism such as Shapiro's is nothing new, though it has perhaps intensified in the recent era of blogs and exceptionally divisive politics.

Still, they say it is troubling, and they worry that conservative students are mistaking professors' attempts to teach critical thinking for propaganda.

Some students "feel they should be essentially spoon-fed a line that is recognizable to them," said Ruth Flower, director of public policy and communications at the American Association of University Professors.

An Orthodox Jew, Shapiro grew up in the Los Angeles area, skipping grades three and nine and entering UCLA at 16. He jumped quickly into campus politics, earning a column in the Daily Bruin campus paper.

That ended in the spring of 2002, after a dispute over a column that criticized campus Muslim groups for supporting terrorism. When the paper wouldn't run it, Shapiro took his case to the air on a local talk-radio show and was suspended by the newspaper.

He later began writing a syndicated column that is now picked up by a handful of outlets and Web sites. His parents had to sign his first contract, since he was only 17 at the time.

Shapiro insists his pages of footnotes prove his book is serious research, not vitriol. Still, some readers are likely to question the objectivity of some sources. And after the book came out this spring, the Daily Bruin reported that there were a number of citation errors, and that several UCLA professors claim they were misquoted.

Shapiro acknowledged a "couple of punctuation errors as far as paraphrasing," which he said would be corrected in the next edition, but said he stands by the material.

Profits from the book will help pay Shapiro's tuition next year at Harvard Law School, several of whose faculty members he has already criticized in print.

"That should be fun," he laughed. But he insists he is genuinely looking forward to learning at an institution that -- despite a fairly large contingent of conservative students -- is viewed by some on the right as the belly of the beast.

"I think conservatives can get a lot from a liberal education," said Shapiro, who insists he also enjoyed his time at UCLA. "If you're being assaulted on all sides you come up with good responses. I want to hear the best that the left has to offer."