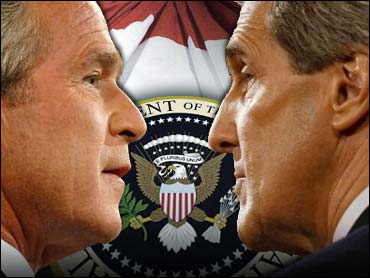 A camouflage-clad Sen. John Kerry went goose hunting Thursday while President Bush paid a call on the archbishop of a heavily Catholic battleground state, a clash of symbolism in a tight race for the White House.

Twelve days before the election, an Associated Press survey among likely voters had the race as a statistical tie, 49 percent for the Massachusetts senator and 46 for the man in the White House. The nominal three-point margin was inside the survey's margin of error.

The same AP-Ipsos Public Affairs survey produced a tie on the question of preferred congressional leadership, 47 percent favoring Democrats and 46 percent for Republicans. That pointed toward problems for House Democrats, struggling to gain the 12 seats they need to win back the majority they lost a decade ago.

In the presidential race, the AP survey depicted a country at a crossroads. Fifty-one percent support the president's conduct of foreign policy and the war on terror. But voters are split on which man would do the better job in the war on Iraq, and Kerry is viewed as better able to stimulate job growth. More than half of those surveyed, 56 percent, said the nation was headed in the wrong direction, a danger signal for any incumbent.

Other recent polls show a similarly close race, with Mr. Bush and Kerry battling over about a dozen states that remain competitive with less than two weeks of campaigning to go.

In Florida, the richest swing state of all with 27 electoral votes, Kerry has essentially pulled even with the president. Mr. Bush was favored over Kerry by 48-47 percent among 808 likely voters in a Quinnipiac University Poll, well within the 3.5 percent margin of error. The same polling organization showed Mr. Bush with a 51-44 lead two weeks ago.

Kerry's hunting excursion in Boardman, Ohio, was a classic of a campaign genre, the photo-op. So, too, Mr. Bush's stop at St. John's Church Rectory in Downington, Pa., where he met with Cardinal Justin Rigali, Catholic archbishop of Philadelphia.

Images counted for much, words less.

Kerry told reporters he had bagged a goose, but by the account of his own aide, that wasn't the point. It's important that voters "get a better sense of John Kerry, the guy," Mike McCurry said of the 60-year-old Massachusetts senator.

Kerry strolled past television cameras on his return from a two-hour hunting trip, wearing a camouflage jacket and carrying a 12-gauge shotgun under his arm. A hunting companion carried the bird the senator said he had shot.

Reporters never got a glimpse of Mr. Bush's meeting with the spiritual leader of Catholics in a state where 23 percent of voters practice the faith. But photographers were briefly permitted inside the 20-minute meeting between the two men, good enough to record the image the president's re-election campaign wanted.

"They had a good discussion about shared priorities," White House spokesman Scott McClellan told reporters after the meeting.

It was Mr. Bush's 40th trip to Pennsylvania of his term in office, underscoring the extraordinary effort he has made to turn a 2000 statewide defeat into a 2004 victory.

Apart from his meeting with the archbishop, Mr. Bush delivered a sharp attack on Kerry's plan to expand health care, insisting it would mean "bigger government with higher costs."

Kerry has repeatedly denied the big government charge, and says Americans would be free to choose their coverage from competing private plans. His proposal would also offer tax breaks to businesses as incentives to provide health care for their employees.

"The effects of the litigation culture are real in Pennsylvania ... medical malpractice premiums are soaring," Mr. Bush said.

Kerry traded his hunting garb for the standard campaign suit and tie later in the day for an appearance in Columbus, Ohio.

He picked up an endorsement from Dana Reeve, widow of Christopher Reeve, the actor who became an advocate for embryonic stem cell research after he was paralyzed in a riding accident.

Mr. Bush's policy, crafted to satisfy abortion opponents who oppose the destruction of human embryos, limits federal support for stem cell research to lines in existence as of three years ago.

Kerry said the president's approach amounted to taking "hope away from people," and he added, "When I am president, we will change this policy — and we will lead the world in stem cell research."

Many scientists say the cells hold promise for treatment of a variety of health conditions.

He accused the Bush administration of ignoring problems ranging from flu vaccine to the war in Iraq while officials spend their days campaigning.