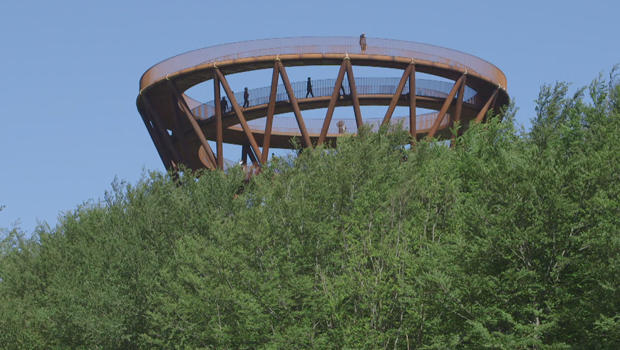 Usually one walks through a forest, but here, an hour outside of the Danish capital of Copenhagen, there's the chance to go right up into it, and, ultimately high above its canopy of trees.

A spiraling walkway – one continuous ramp – soars 14 stories high. On a clear day, from the top, visitors can see Sweden.

It was the brainchild of Jesper Mathiesen, and the centerpiece of a nature park he runs called Camp Adventure. Mathiesen, a former Danish Navy SEAL, feels at home in the forest – and in a Denmark which lost huge swaths of forest to farming, he's hoping this might foster a connection with nature.

"It's for everybody," Mathiesen said. "It's for the family with the very small children, it's for the old people who don't work anymore [who] just want to relax a little bit, right, and have a good time."

Architect Tue Foged and his team designed this unusual tower, meant to both stand out, and at the same time blend in with the forest.

Correspondent Seth Doane asked, "Why did you want it to have this kind of hourglass-y shape?"

"The whole gesture is kind of respecting the existing trees," Foged replied.

it's reminiscent of the Guggenheim Museum in New York, Frank Lloyd Wright's spiraling museum. Here, it's not art but the forest that's on display.

The same idea is at play at New York's Highline, an elevated, urban walkway where visitors get a unique perspective of the city, and at the Vessel, where architects created a soaring, exterior staircase which climbs up into the jungle of Manhattan.

Doane asked Foged, "This seems like a very simple structure, the spiral. How complicated was it to get to this design?"

"It's complicated to make it look simple!" he replied. "That's the real issue! You can't imagine how much work there is to get the simplicity perfect."

A raised pathway leads visitors to the tower, so that the forest itself remains untouched. "We are trying to reconnect people to the forest and allowing them to do so in a manner where you don't destroy the very thing you've come to see," Foged said.

It costs about US$20 to climb this raw structure, which is built from locally-sourced oak and untreated steel.

"If we just wanted people to access the view platform, we could've just installed a staircase and an elevator," said Foged. "But we wanted people, like, everybody to just have the slow walk up through the top of the trees."

It has attracted nearly 200,000 visitors since the tower opened in March.

Lisa Algstam and her daughter, Bryn, came all the way from Washington Atate. "We got off the plane last night and here we are!" Algstam laughed. "It's just something different, something unusual, something very unique. And, of course, it celebrates nature."

This tree-top tower celebrates nature, and this forest, by simply allowing visitors a fresh perspective on what was always there.

This week on "Sunday Morning" (October 9)

The father of the cellphone
Thanks for reading CBS NEWS.
Create your free account or log in
for more features.
View CBS News In
CBS News App Open
Chrome Safari Continue
Be the first to know
Get browser notifications for breaking news, live events, and exclusive reporting.