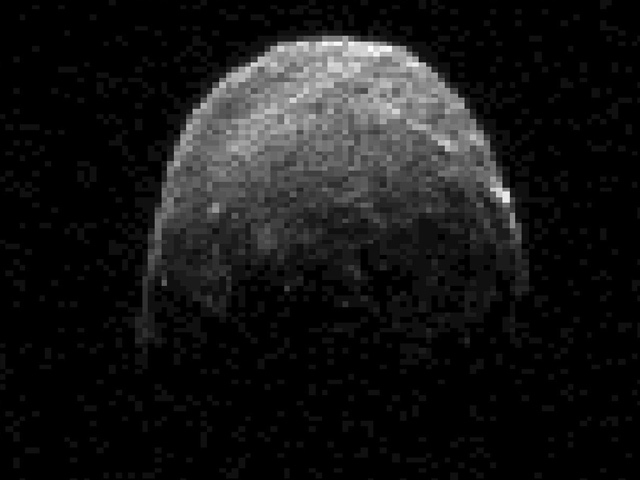 NASA released today what it described as the highest-resolution images ever generated by radar of a near-Earth object as a huge asteroid passed by us and then headed deeper into space.

The asteroid, known as 2005 YU55, is as big as an aircraft carrier. It zipped by Earth on Tuesday in the closest encounter by such a massive space rock in more than three decades.

The last time a large cosmic interloper came that close to Earth was in 1976, and experts say it won't happen again until 2028. Scientists at NASA's Deep Space Network in the California desert have tracked the quarter-mile-wide asteroid since last week as it approached from the direction of the sun at 29,000 mph. Astronomers and amateur skygazers around the world kept watch, too.

The Clay Center Observatory in Brookline, Mass., planned an all-night viewing party so children and parents could peer through research-grade telescopes and listen to lectures. The asteroid can't be detected with the naked eye. For those without a telescope, the observatory streamed video of the flyby live on Ustream, attracting several thousand viewers. The asteroid appeared as a white dot against a backdrop of stars.

"It's a fantastic opportunity to educate the public that there are things out in space that we need to be aware of," including this latest flyby, said observatory director Ron Dantowitz. Dantowitz added: "It will miss the Earth. We try to mention that in every breath."

If an asteroid that size would hit the planet, Purdue University professor Jay Melosh calculated the consequences. The impact would carve a crater four miles across and 1,700 feet deep. And if it slammed into the ocean, it would trigger 70-foot-high tsunami waves.

Since its discovery six years ago, scientists have been monitoring the spherical, coal-colored asteroid as it slowly spins through space and were confident it posed no danger. Asteroids are leftovers from the formation of the solar system some 4.5 billion years ago. Scientists believe their growth was stunted by Jupiter's gravitational pull and never had the chance to become full-fledged planets. Pieces of asteroids periodically break off and make fiery plunges through the atmosphere as meteorites. Don Yeomans, who heads NASA's Near Earth Object Program, said 2005 YU55 is the type of asteroid that humans may want to visit because it contains carbon-based materials and possibly frozen water.

With the space shuttle program retired, the Obama administration wants astronauts to land on an asteroid as a stepping stone to Mars. "This would be an ideal object," Yeomans said.