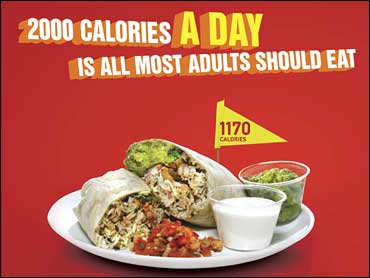 Craving a burrito with sour cream and guacamole? What if you knew it had more than half the calories you should eat in a day?

The city Health Department is expanding its healthy-eating campaign with subway ads that say most adults should limit themselves to 2,000 calories day.

Posters that appeared Monday in about 1,000 subway cars provide calorie counts for several menu items - like 470 for a giant apple bran muffin or 1,170 for a chicken burrito with toppings.

The three-month ad campaign is intended to build on the city's new regulation requiring chain restaurants to post calorie counts on their menus. Officials are betting people will eat fewer calories if they know how many they should consume.

The ads are in 20 percent of city subway cars.

The calorie-posting rule applies to chain restaurants that have 15 or more locations nationwide. It took effect in May, but legal action delayed enforcement until July.

The 2,000-calorie figure is an average. Federal Centers for Disease Control and Prevention recommendations vary by age, gender and level of activity. Men can consume more calories than women without gaining weight, and 20-year-olds more than 60-year-olds.

New York City's calorie-count regulation has paved the way for similar laws elsewhere. California last week became the first state to require restaurant chains to reveal how many calories are in their standard menu items.

Natalia Kaplan, of Queens, said she hadn't noticed the poster directly behind her on an E train featuring that 1,170-calorie burrito, but she approved of the campaign.

"It makes you aware," said Kaplan, who said she pays close attention to the calorie information fast-food chains are now required to provide.

"If I go to Dunkin' Donuts, I look at the calories, and I try to take the least-calorie doughnut," she said.