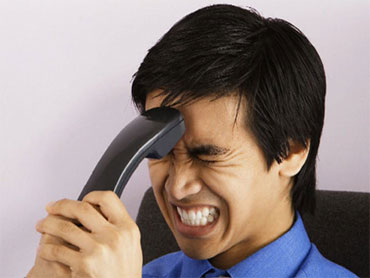 The sort of music they play when your call gets put on HOLD seems like their way of saying: YOUR CALL IS NOT IMPORTANT TO US. Our Cover Story is reported by Martha Teichner:

At 79, with her heart condition, Mona Shaw doesn't seem like the violent type. She and her husband, Don, live near Manassas, Va., and rescue old or disabled dogs.

Comcast had screwed up their phone service. They just wanted it back.

"We had been down there, we had been down to the office and asked to speak to a manager or a supervisor," she said. "They put us out on a bench in the hallway, said 'We'll get him for you. Two hours later, they walked out and said, 'oh, he went home.'"

That was a Friday in August 2007. By Monday afternoon, after a week without a phone, Mona Shaw was mad.

"So I walked in, passed a whole bunch of people standing in line and leaned over the counter and started smashing the bits out of their computer and telephone," she laughed. "One woman got up and ran. She just took off running.

Admit it: When you're on hold, in customer service hell, and the robotic voice tells you, The average wait time is . . . eighty . . . nine . . . minutes, deep down, wouldn't you like to get out a hammer, too?

"When we call, what we want is 'yes,' that's it," said Emily Yellin, the author of "Your Call Is (Not That) Important to Us," a cold, hard look at customer service in the United States.

"I go and talk all over the country about this now, and every audience I ever go to, I ask them, 'Who in here has never had a bad experience with customer service?'" Yellin said. "No one has ever raised their hand."

Based on Bureau of Labor Statistics data, she estimates that 3 million people work in call centers in the United States, another 2 million in centers around the globe.

The NBC sitcom "Outsourced" sums up our stereotype of customer service: "Yesterday we out-sourced the entire call center to India!"

The call center industry didn't even exist until AT&T introduced its toll-free 800-numbers in 1967.

"The most striking thing is how much it costs to have a live American agent answer a call," Yellin said. "A live agent is about $7.50 per call. To outsource to a foreign country is about $2.35 a call. To use one of those voice response systems, the 'press one for this, the press two for that,' it's about 35 cents a call. A lot of companies saved a whole lot of money, and everybody was happy - except the customer.

"And really, I think a lot of customer service agents have had to mop up after this," Yellin said.

It should come as no surprise that the telephone has been a source of customer ire ever since it was invented.

Boys were hired as the first operators. But they were so rude to callers, they were replaced by young women, who became known as "hello girls."

In 1890, Mark Twain complained that his phone service in Hartford, Conn., was "the very worst on the face of the whole earth." He went on: "And if you try to curse through the telephone, they shut you off."

Today, that feeling of helpless rage has become an American fact of life.

Michael Douglas in the film "Falling Down" could have been any of us: "Hey, I'm really sorry too!" he said as he whipped out an automatic weapon.

"The four times we've done the study, 70 percent or more of American households who say, 'I had a problem with a product or service,' say that they experienced rage," Broetzmann said.

"What's really telling is we also asked people, 'What did you get?' And sixty percent of complainants - sixty! - said they got nothing in response to their complaint. Nothing."

But that may be changing, thanks to the Internet.

A couple on vacation in Mexico adopted the dog Paco. Delta Airlines lost him.

Ben Popken posted the story on the website consumerist.com.

"He fell asleep because he was on hold so long with the tech support department of his own company," Popken said.

"So our job at consumerist is to scoop up those horror stories and shove them into the spotlight with our flood of traffic."

Two to three million people a month read the website, which was recently bought by Consumer Reports.

"These days an individual consumer can put their true tale out there and really start a PR firestorm for that company," Popken said.

"Our philosophy is we are about customer service," Harell said. "That's what we live and die by. Any customer needs assistance, they can call, tweet, e-mail, chat. They can get us and we can help them solve the problem."

FedEx encourages that attitude. At its Memphis call center you can see Delois Peyton's desk full of awards...

"I don't consider customers mad, just another opportunity is the way I look at it - an opportunity to turn the situation around and have a satisfied customer," Peyton said.

And speaking of attitude, even Comcast has undertaken some radical readjustments, with commercials pronouncing, "We're only as good as our word."

Now a footnote: Mona Shaw, the hammer woman, received a free trip to California to tell her story on "Dr. Phil."

"I had to do something to get at a manager," she explained.

And the hammer? She gave it to her church, which auctioned it off for $180, providing Mona Shaw with an exquisite feeling of customer satisfaction.

On the other hand: How lefties cope in a right-handed world