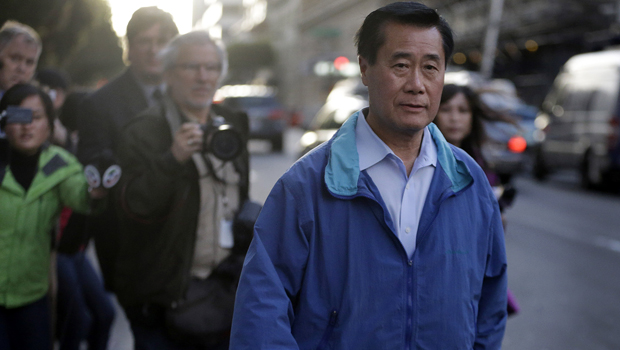 SAN FRANCISCO -- A California state senator accused of accepting bribes and introducing an undercover agent to an arms trafficker is dropping out of the race for California secretary of state.

Sen. Leland Yee's attorney, Paul DeMeester, read a letter Thursday that Lee sent to California Secretary of State Debra Bowen informing her that he was dropping out of the race for the office.

"I hereby withdraw my candidacy for election of Secretary of State, effective immediately," the one-line letter read.

"This was a very personal decision on the part of the senator," DeMeester said. "This is what he wanted to do in relation to that election for office given the circumstances of the federal case."

State legislators have called on Yee to step down from the state Senate. Asked whether Yee planned to do that, DeMeester declined to comment.

"We're taking it one issue at a time," DeMeester said.

Yee was arrested Wednesday during a series of raids in Sacramento and the San Francisco Bay Area.

The criminal complaint accuses Yee, a state politician who has authored gun control legislation, of accepting tens of thousands of dollars in cash and campaign contributions in exchange for providing official favors, influencing legislation and helping to broker an arms deal with an undercover FBI agent.

He or members of his campaign staff accepted at least $42,800 in cash or campaign contributions from undercover FBI agents in exchange for carrying out the agents' specific requests, according to court documents unsealed Wednesday.

Keith Jackson, Yee's campaign aide, was a central link in the complex web of crime.

Jackson also served as a consultant to the San Francisco-based Ghee Kung Tong fraternal organization of a former gang leader who was also arrested Wednesday.

Raymond Chow - nicknamed Shrimp Boy - introduced Jackson to the undercover agent. The complaint said that GKT is a "criminal enterprise" with a pattern of racketeering activity. The group's headquarters was among several sites searched by investigators Wednesday along with Yee's home.

Firefighters were seen going inside the office with a circular saw and later said they had cracked a safe. FBI agents exited with boxes and trash bags full of evidence that they loaded into an SUV.

According to the court document, in 2013, Yee and Jackson accepted $6,800, the maximum campaign contribution allowed by law, to present an official proclamation at a Ghee Kung Tong anniversary celebration.

Yee performed "official acts" in exchange for donations from undercover FBI agents, the document said, as he sought to dig himself out of a $70,000 debt incurred during a failed San Francisco mayoral bid in 2011.

He is also accused of accepting $10,000 in January 2013 from an undercover FBI agent in exchange for making a call to the California Department of Public Health in support of a contract it was considering.

In addition, Yee received campaign donations in exchange for introducing an undercover FBI agent to an arms trafficker.

Investigators said Yee discussed helping the agent get weapons worth $500,000 to $2.5 million, including "shoulder-fired" weapons or missiles, and explained the entire process of acquiring them from a Muslim separatist group in the Philippines to bringing them to the U.S., according to an affidavit by FBI agent Emmanuel V. Pascua.

Yee said he was unhappy with his life and told the agent he wanted to hide out in the Philippines, the document said. "There's a part of me that wants to be like you," he told the undercover agent. "You know how I'm going to be like you? Just be a free agent there."

The introduction with the trafficker took place at a San Francisco restaurant earlier this month, according to the documents. Yee said he wouldn't go to the Philippines until November.

"Once things start to move, it's going to attract attention. We just got to be extra-extra careful," he said, according to court documents.

Yee was released from custody shortly before 7 p.m. on a $500,000 unsecured bond. He left the federal courthouse in San Francisco without comment.

DeMeester said Wednesday Lee plans to plead not guilty but declined to discuss the case in detail, saying it's complex. The complaint is 137 pages.

"The top priority was to get the senator released, and we were able to accomplish that," DeMeester said. "The future will hold a lot of work facing this case."

Jackson, a former San Francisco school board president and well-known political consultant who raised money for Yee's unsuccessful mayoral run in 2011 and his bid for secretary of state, remained in custody.

Jackson, 49, did not enter a plea Wednesday as the FBI accused him of being involved in a murder-for-hire scheme and trafficking guns and drugs. He was denied bail and is due back in court Monday.

Yee was shackled at the ankles when he appeared in court Wednesday afternoon with 19 other defendants. His demeanor was downcast, and he looked nervously into the packed gallery.

Yee was charged with six counts of depriving the public of honest services and one count of conspiracy to traffic in guns without a license. If convicted on all the counts, he faces up to 125 years in prison.

Senate President Pro Tem Darrell Steinberg, flanked by 14 other Democratic senators at a news conference in his Capitol office, called on Yee to resign from the Senate or face suspension.

"Don't burden your colleagues and this great institution with your troubles. Leave," Steinberg said.

Yee is the third Democratic state senator in California to face criminal charges this year. Sen. Rod Wright was convicted of perjury and voter fraud for lying about his legal residence in Los Angeles County, and Sen. Ron Calderon has been indicted on federal corruption charges. Wright and Calderon are taking a voluntary leave of absence, with pay, although Republicans have called for them to be suspended or expelled.

Yee, 65, represents western San Francisco and much of San Mateo County. He is best known for his efforts to strengthen open records, government transparency and whistleblower protection laws, including legislation to close a loophole in state public records laws after the CSU Stanislaus Foundation refused to release its $75,000 speaking contract with former vice presidential candidate Sarah Palin in 2010.

Yee's arrest came as a shock to Chinese-Americans who see the senator as a pioneering leader in the community and a mainstay of San Francisco politics, said David Lee, director of the Chinese American Voters Education Committee.

"People are waiting to see what happens, and they are hoping for the best, that the charges turn out not to be true," said Lee, whose organization held a get-out-the-vote event with Yee and other officials just last week.

For his efforts to uphold the California Public Records Act, Yee was honored last week by the Northern California chapter of the Society of Professional Journalists.

Yee has at times clashed with fellow Democrats for casting votes of conscience, refusing to support the Democratic budget proposal in 2011 because of its deep cuts to education, social services and education. He also opposed legislation by a fellow Democrat, Assemblyman Paul Fong of Cupertino, that banned the sale of shark fins used for Chinese shark fin soup, saying that it unfairly targeted the Chinese-American community.

Yee was among three Democrats running this year for secretary of state, the office that oversees elections and campaign finance reporting.

A man was charged last year for threatening Yee over legislation that he proposed to limit rapid reloading of assault weapons. Yee also authored legislation that that would have required the state to study safe storage of firearms.