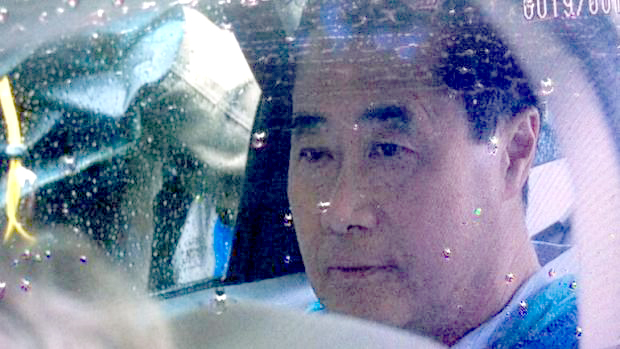 SAN FRANCISCO -- A California state senator who advocated gun control legislation asked for campaign donations in exchange for introducing an undercover FBI agent to an arms trafficker and told him how to get shoulder-fired automatic weapons and missiles from a Muslim separatist group in the Philippines, according to court documents unsealed Wednesday.

The allegations against state Sen. Leland Yee were outlined in an FBI affidavit in support of a criminal complaint. The affidavit accuses Yee of conspiracy to deal firearms without a license and to illegally import firearms. He was arrested Wednesday and appeared later in federal court, where bail was set at $500,000.

Yee's arrest came as a shock to Chinese-Americans who see the senator as a pioneering leader in the community and a mainstay of San Francisco politics, said David Lee, director of the Chinese American Voters Education Committee.

"That''s shocking news to me," San Francisco Mayor Ed Lee said when asked about Yee's arrest, according to CBS San Francisco. "It's many years of public service so, I don't know what's occurred there ... I hope for the best."

Yee is also accused of accepting tens of thousands of dollars in campaign contributions and cash payments to provide introductions, help a client get a contract and influence legislation. He or members of his campaign staff accepted at least $42,800 in cash or campaign contributions from undercover FBI agents in exchange for carrying out the agents' specific requests, the court documents allege.

Yee discussed helping the agent get weapons worth $500,000 to $2.5 million, including shoulder-fired automatic weapons and missiles, and took him through the entire process of acquiring them from a Muslim separatist group in the Philippines to bringing them to the United States, according to the affidavit by FBI Special Agent Emmanuel V. Pascua.

He was unhappy with his life and told the agent he wanted to hide out in the Philippines, according to the affidavit.

"There's a part of me that wants to be like you," he told the undercover agent, according to the affidavit. "You know how I'm going to be like you? Just be a free agent there."

The introduction with the trafficker took place at a San Francisco restaurant earlier this month, according to the documents. Yee said he wouldn't go to the Philippines until November.

"Once things start to move, it's going to attract attention. We just got to be extra-extra careful," he said, according to court documents.

The affidavit names Yee and 25 others, including Raymond Chow, a onetime gang leader with ties to San Francisco's Chinatown known as "Shrimp Boy," and Keith Jackson, Yee's campaign aide. Jackson is accused of multiple counts of fraud and conspiracy to commit fraud.

Chow and Yee were arrested Wednesday during a series of raids in Sacramento and the San Francisco Bay Area.

According to court documents, Yee performed "official acts" in exchange for donations from undercover FBI agents, as he sought to dig himself out of a $70,000 debt incurred during a failed San Francisco mayoral bid.

Yee is also accused of accepting $10,000 in January 2013 from an undercover FBI agent in exchange for making a call to the California Department of Public Health in support of a contract was considering.

The agent who discussed arms with Yee presented himself as a member of Ghee Kung Tong, a fraternal organization in San Francisco's Chinatown that Chow reportedly headed. It was among the sites searched Wednesday.

Firefighters were seen going inside with a circular saw and later said they had cracked a safe. FBI agents were seen coming out with boxes and trash bags full of evidence that they loaded into an SUV.

Chow is accused of money laundering, conspiracy to receive and transport stolen property and conspiracy to traffic contraband cigarettes.

Yee, 65, represents western San Francisco and much of San Mateo County. He is best known for his efforts to strengthen open records, government transparency and whistleblower protection laws.

Chow ran a Chinese criminal organization with ties to Hong Kong and was convicted of gun charges. But he had recently been held up as an example of successful rehabilitation and was praised for his work in the community.

Chow acknowledged in an unpublished autobiography that he ran prostitution rings in the 1980s, smuggled drugs and extorted thousands from business owners as a Chinatown gang member, KGO-TV reported two years ago.

In 1992, Chow was among more than two-dozen people indicted on racketeering charges for their alleged involvement in crimes ranging from teenage prostitution to an international drug trade mostly involving heroin.

Chow told KGO-TV in a 2012 interview that he had changed and was working with at-risk children in San Francisco.