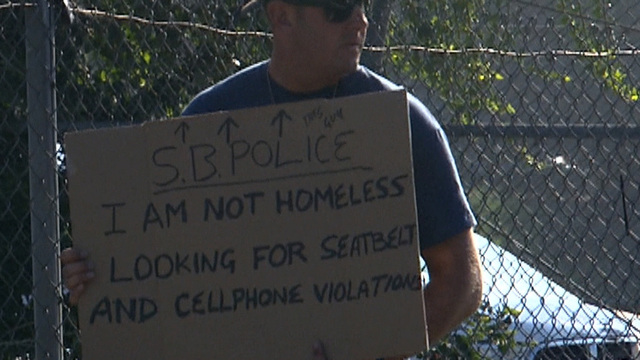 Drivers assumed the officers were panhandlers, but had they read the signs, instead of whatever was on their phones, they would have realized they were about to get busted.

Some drivers were caught with more than just their cellphone in hand.

"We had a woman coming down with no seat belt on. She was talking on her phone and putting on mascara all at the same time -- and driving," San Bernardino police officer Donald Sawyer said.

Cell phones are now involved in 1.6 million auto crashes each year that kill 6,000 people. Ninety-eight percent of adults say they know texting and driving is unsafe but 49 percent admit to still doing it.

"It happened and it will probably happen again. However, I got caught," David Hernandez said.

"I text sometimes and I know I shouldn't be. I think it's good. I mean it'll teach me a lesson," Al Navarro said.

But others have not learned their lesson.

"You're going to be cited again this morning for using a cellular device while operating a motor vehicle," one officer told a driver.

They caught her just two weeks after her last ticket. A second offense is $285.

Peck said she was angry, and he doesn't think people understand the risk they're taking.

"I often ask people if they would drive blindfolded and of course the answer is, 'No.' And they kind of see the relation between driving blindfolded and driving distracted," he said.

On average, a person takes their eyes off of the road for five seconds every time they text. At 55 mph, that's like covering the length of an entire football field blindfolded.

San Bernardino is cracking down on distracted driving because, as Lt. Travis Walker said, the city now has more traffic fatalities than homicides every year.

"It's almost like, 'The rules don't apply to me.' And that's what's unfortunate. Accidents are preventable," he said.