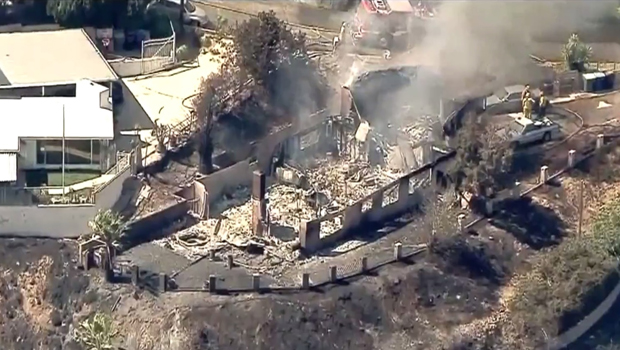 SAN BERNARDINO, Calif. -- A small but fast-moving brush fire that broke out on a Southern California hillside burned five structures and injured three people, according to fire officials.

A spokesman for the San Bernardino County Fire Department said the fire broke out in the northern part of the city Saturday afternoon and quickly spread to about 10 acres before firefighters got a handle on it.

Capt. Jeremy Kern said investigators were trying to determine what kinds of structures were burned and the extent of their damage.

Two firefighters and a civilian were treated for smoke inhalation or heat exhaustion.

The cause of the fire was under investigation. Investigators told CBS Los Angeles they were looking into the fire as a possible case of arson in response to witness accounts.

Firefighters were being aided by a growing network of about 20 high-definition, online cameras that run day and night.

The cause of the Trailhead Fire was still under investigation, but officials were worried about a rash of new fires -- both on forest land and in cities -- sparked by fireworks.

"On the Fourth of July, far more fires are reported than any other day of the year," said Los Angeles City Fire Chief Ralph Terrazas.

It's estimated fireworks cause more than 18,000 fires in the U.S. each year, including a 2,500 acre fire in Boise, Idaho this week.

Five years of record drought have made California a tinderbox, ripe for explosive fire conditions. The U.S. Forest Service reports the drought has killed off 66 million trees, increasing the risk for wildfires.

"This could be the most volatile fire season in over 100 years," L.A. County Fire Chief Daryl Osby said. "So we encourage people, whether it's fireworks or fires, to be extremely careful."

In L.A. County, authorities have already confiscated more 300,000 pounds of illegal fireworks and warned even small fireworks that appear harmless can be hazardous, if used without caution.