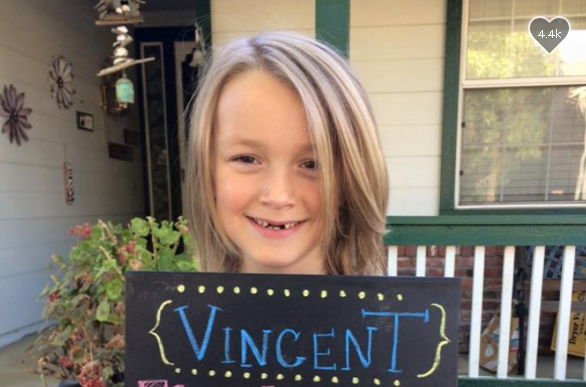 A 7-year-old boy who grew his hair out to donate to cancer patients is now battling the disease himself.

Vinny Desautels of Roseville, California, recently donated his hair to "Wigs for Kids," an organization that provides free wigs and support for children who have lost their hair due to cancer treatment or other medical issues.

Despite being teased throughout the two years it took to grow his hair out, Vinny remained steadfast in his commitment. "It didn't deter him from his mission... to help a child in need," his grandparents wrote on a GoFundMe page they set up to raise money for his medical expenses.

But soon after the family mailed Vinny's locks to the organization, he began suffering from his own health problems. At first, his parents noticed his eye was swollen -- a common enough condition that was dismissed as allergies by the family's doctor.

Weeks passed and the swelling got worse. Then came knee pain. Vinny's parents, Jason and Amanda, also discovered a significant lump on the boy's right hip and brought him to the emergency room. Doctors identified a large growth on his pelvic bone.

At an eye doctor appointment the next day, the family expressed concern that the conditions may be related. The doctor agreed and Vinny underwent a number of tests. He was diagnosed with stage IV cancer.

Despite the frightening circumstances, Vinny has remained positive and brave, his family says.

"As long as we're there with a smile, telling him he's going to be alright, he has the same attitude," his father, Jason Desautels, told the Washington Post. "Vinny is like us -- an eternal optimist."

A post to the family's blog earlier today shows a photo of the boy grinning while on his way to another doctor's appointment. The caption reads: "Another early morning with the Gremlin Rule in effect (no food or water after midnight) but Vinny does it with a smile on his face. Heading to meet the oncologist."

He is scheduled to begin chemotherapy today.

His parents say they have been a bit overwhelmed with the attention the family has received but appreciate the support and promise to keep writing updates on Vinny's condition.

The support towards Vinny has been beyond extraordinary, and we appreciate all of it. However this is all new to us as a family and we don't want to lie to you we are a little uncomfortable. We're just a blue collar family who enjoys bbq's with friends, and fart jokes. Please bear with us. I will do my best to keep all of you updated. We are very positive and optimistic. Thank you all for your time and support.