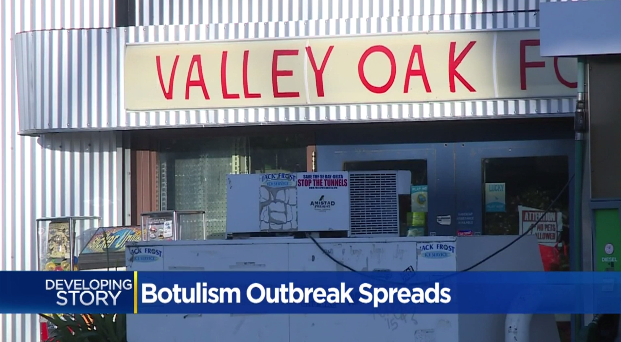 Outside, Valley Oak Food and Fuel is open for business, but inside, health officials have stopped the sale of food items and roped off a part of the store.

State and county health officials have confirmed nine people have been hospitalized, including possibly a 16-year-old. Five cases were first reported on May 5. This week four more people have become sick. A tenth person is being tested after showing similar symptoms related to the rare and potentially fatal illness.

As the number of those who become sick continues to grow, so too does the concern for those who live in this small town.

"It's tough on a small town," said one local woman, who did not want to give her name. "It's tough because we know some of the youth who were affected by it, so our hearts are heavy."

"From the preliminary testing of the cheese, it was positive for botulism," said Dr. Oliva Kasirye, a health inspector with the Sacramento County Public Health Department, who has been part of the on-going investigation.

Now that the source of the outbreak has been determined, the investigation will turn to the cause and seek to answer if the gas station mishandled the food items or if the manufacturers or distributors are at fault.

According to the Centers for Disease Control, botulism is caused by a toxin produced by bacteria. Symptoms include blurry vision, slurred speech, muscle weakness and difficulty swallowing.

"But if there are any muscles that have been paralyzed from the toxin, it's not reversed by the anti-toxin. That's a process that could take time and that's why the recovery is very slow," explained Dr. Kasirye.

And even with the anti-toxin treatment, there is no guarantee patients will fully recover.

Another concern is the gas station is on a busy road that's not just used by locals, but many people who come out fishing or who pass-by as they travel through the state. So, health officials are not ruling out the possibility that there still may be more cases reported.

Many in the small town are not faulting the gas station owners, saying they will wait for the state's complete report.

Meanwhile, a lawsuit has been filed by the family of one the patients against the gas station and others, claiming neglect.