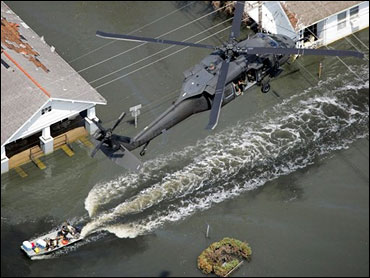 This column was written by Catherine Seipp.

Like many people following the devastation around New Orleans from the comfortable vantage point of Los Angeles, I feel grateful to live in a place where we only have to deal with the occasional earthquake and urban riot -- plus, of course, those regular brushfires and flood-caused landslides. It seems odd to think of it now, but for years the metaphor in this country for domestic catastrophe has been not Louisiana but California.

Certainly we've had our share of disasters, but Katrina's wake puts them in perspective. You could add up all the California cataclysms in recent memory, especially those particularly dramatic ones here in L.A. -- the 1994 earthquake, the 1992 riots, assorted other quakes and fires and floods -- and together they wouldn't equal the horrors we've seen this past week.

The Big One could arrive tomorrow, for all anyone knows. But if it doesn't, and if the eventual body count from Katrina makes it the worst natural disaster in U.S. history (as seems increasingly likely), the second worst still won't be any earthquake -- not even San Francisco in 1906 -- but another hurricane, the one that killed from 6,000 to 12,000 people around Galveston, Texas in 1900. Because they can't be predicted, earthquakes have a peculiar hold on the imagination. But so far in this country, storms have always caused more damage.

And, of course, they can be predicted, which is why Katrina's aftermath is not just a terrifying spectacle of natural disaster but a demoralizing one of human bungling. Perhaps understandably, this has led to more than the usual amount of posturing commentary, from more than the usual suspects. Apart from the welcome comic relief of Sean Penn, bailing out that leaky boat he forgot to patch on his rescue mission to New Orleans, I've found this depressing as well as vicariously embarrassing.

Why, for instance, is it such a mortal offense (as Al Sharpton, among others, has claimed) to call storm survivors refugees? Isn't "refuge from the storm" an old and blameless phrase? Why do middle-class whites seem to have the idea that expressing outrage on behalf of poor and dispossessed blacks, especially in ghetto language, is an appropriate way to display solidarity? Do they think this makes them honorary dispossessed blacks? Speaking of language, I'm glad at least that the word "homeless" has been reclaimed to mean "people who have lost their homes," and is no longer (or at least not entirely) a polite synonym for "vagrants."

Because of all the partisan sniping, like many people I'm heartened whenever Lt. Gen. Russell Honore, head of the National Guard in New Orleans, enters the media spotlight with his no-nonsense focus on getting the job done rather than assigning blame. "It wasn't anything the government did, the storm had the damn vote," the Los Angeles Times quoted Honore saying this week. But although that attitude is exactly what we need right now, it isn't necessarily exactly true.

As Brendan Loy, the Notre Dame law student and self-described weather nerd who three days before Katrina hit warned that New Orleans should be evacuated, wrote on his blog this week:

You simply could not have a greater threat to a specific location, 48 hours before landfall, than the threat that New Orleans faced on Saturday morning... Thus, if an evacuation was not appropriate then, then it follows that an evacuation must never be appropriate at 48 hours. And that can't be, because really, 48 hours is already too late; studies have long shown that it would take 72 hours to completely empty the city of New Orleans. So unless the city's hurricane strategy was to throw up its hands and say, "there's nothing we can do," a mandatory evacuation -- school buses and all -- was most certainly called for on Saturday morning.

If a 23-year-old part-time blogger could figure this out in South Bend, Indiana, shouldn't the mayor of New Orleans, the governor of Louisiana and, yes, various federal authorities in Washington, D.C. have been able to? Loy, who the New York Times profiled Monday (quoting Mickey Kaus, who suggested Loy's hurricane reports "should be in the Smithsonian, if you can put a blog in the Smithsonian") went on this week to describe

the absolute absurdity of statements by the likes of [Homeland Security Director] Michael Chertoff and [FEMA head] Michael Brown that they were somehow "surprised" by how bad Katrina's devastation was. If that's true, they're criminally incompetent, and if it's not true, they're lying to the public in the name of political spin.

None of which means that New Orleans, with a poverty rate twice the national average, and a crime rate ten times the national average, didn't have problems at the local level before disaster struck. As former congressman Billy Tauzin used to say, "half of Louisiana is under water, and the other half is under indictment." I can't recall any event during our various episodes of natural disaster and civil unrest in L.A. that resembles what's been going on in New Orleans, even granting that the hurricane itself was worse than anything we've faced.

The only incident I can remember that even begins to compare is during the 1992 riots, when then police chief Daryl Gates drove off to a Brentwood fundraiser just as things began to heat up, symbolizing the police abandonment of South-Central. That was bad. But not as bad as the sight of all those buses, sitting unused and abandoned in New Orleans. Or reports of how Louisiana governor Kathleen Blanco and New Orleans mayor Ray Nagin delayed evacuation and hadn't corrected problems they knew existed -- such as rampant crime in the Superdome when 14,000 people were sent there in 1998 because of Hurricane George.

We complain plenty about local government in California, as I suppose we should, but we do have earthquake codes. These seem to be taken more seriously than levee repair and wetlands restoration in Louisiana -- much of which, of course, is the federal government's responsibility. You can't blame everything on the mean old Republicans. But just because not everything is Bush's fault doesn't mean that some things aren't.

Catherine Seipp is a writer in California who publishes the weblog Cathy's World. She is an NRO contributor.

By Catherine Seipp
Reprinted with permission from National Review Online