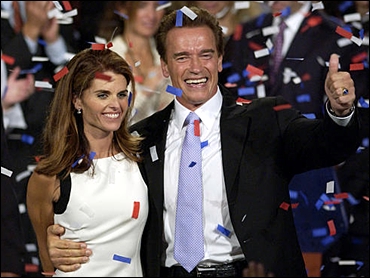 California voters recalled Gov. Gray Davis on Tuesday and replaced him with actor Arnold Schwarzenegger, bringing an end to a remarkable campaign that featured one of the planet's best-known entertainers and captivated an international audience.

"I will not fail you, I will not disappoint you, and I will not let you down," the Republican Schwarzenegger vowed after receiving a phone call from Davis conceding the race.

The Democratic incumbent became the first California governor pried from office, and only the second nationwide to be recalled. Davis was elected to a second term just 11 months ago with less than 50 percent of the vote, but fell victim to a groundswell of discontent in a state that has struggled with its perilous financial condition.

"Tonight, the voters did decide it's time for someone else to serve, and I accept their judgment," Davis said. He pledged to work for a smooth transition.

Schwarzenegger claimed victory at a Los Angeles hotel ballroom, thanking his wife, Maria Shriver, "for the love and the strength" that she's provided.

The 56-year-old Austrian-born action star was introduced to a delirious crowd of supporters by Jay Leno, on whose late-night show he announced his candidacy in August.

CBS News exit polls indicated that recent allegations of sexual misconduct did not hurt Schwarzenegger, who won the support of 42 percent of women. Most voters said they made up their minds about the election more than a month ago.

Schwarzenegger won support from conservatives, moderates and even 18 percent of Democrats.

The California secretary of state has until Nov. 15 to certify the election; the new governor can then immediately be sworn into office. He will serve the remaining three-plus years of Davis' unfinished term, which began last January.

Voters faced two questions — whether to recall Davis, and who among the other candidates should replace him if he was removed. On the first question, they voted a resounding "yes."

The extraordinary spectacle of a recall election in the nation's largest state drew large numbers of voters to the polls. By late afternoon, Terri Carbaugh, a spokeswoman for the secretary of state, said a turnout of 60 percent appeared likely — higher than the 50.7 percent turnout in last November's gubernatorial election.

As colorless as his name, Gray Davis was also known as a canny politician with sharp elbows. Once chief of staff to Gov. Jerry Brown, he rose through the political ranks as a state assemblyman, controller and lieutenant governor, before becoming governor in 1999.

By contrast, Schwarzenegger's political inexperience seemed a virtue to many voters.

The cast of characters and outsized ballot gave the campaign a carnival-like atmosphere and provided late-night comics with a stream of material.

But to many Californians, it was serious business.

"I'm horrified at the thought that Schwarzenegger can be our governor," said Gretchen Purser, 25, of Berkeley, who voted against recall. "I'm sick of Republicans trying to take over the state."

Ed Troupe, 69, of Thousand Oaks, voted yes for recall and for Schwarzenegger. "As far as I'm concerned," he said, "Gray Davis is one of the dirtiest politicians I've ever encountered."

Ultimately, the plot turned on the fates of two personalities who could not have been more different — the bland and uninspiring Davis, and Schwarzenegger, the exuberant bodybuilder-turned-action star.

Though Schwarzenegger held a commanding lead over his rivals going into the final week, his campaign was shaken by allegations published in the Los Angeles Times just days before the election from six women who said he groped them or made unwanted sexual advances. Allegations continued to surface over the weekend, and by Election Day a total of 16 women had come forward.

Schwarzenegger also was confronted with reports that he had praised Hitler as a young man — accusations he disputed.

Responding to the sexual misconduct charges, Schwarzenegger acknowledged he had "behaved badly sometimes." But he attacked the newspaper and some of his accusers for what he called a last-minute effort to derail his candidacy.

Voters also rejected Proposition 54, a contentious initiative that would have banned state and local governments from tracking race in everything from preschools to police work. Voters across the racial spectrum rejected the measure, according to exit polling.