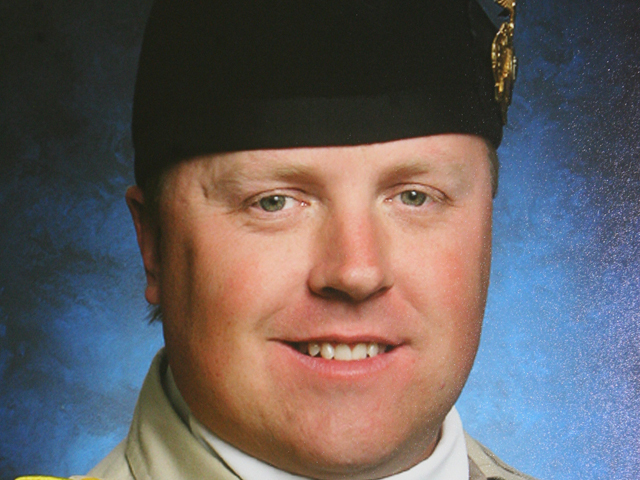 The San Bernardino deputy who was killed during a shootout with suspect killer Christopher Dorner has been identified as Det. Jeremiah MacKay, said the San Bernardino County's Department during a news conference on Wednesday.

Sheriff John McMahon said that MacKay, 35, was pronounced deceased at the hospital. According to McMahon, MacKay was a member of the sheriff's department for 15 years and that he was married and a father to two children -- a 7-year-old girl and a 4-month-old son.

MacKay was presently assigned to the Yucaipa station but was also a detective at the Big Bear station.

"My sincere condolences go out to the MacKay family," said McMahon. "This is truly another sad day for law enforcement. Our department is grieving from this event."

MacKay was killed Tuesday as authorities closed in Dorner, wanted for killing two civilians and a Riverside cop, while he was holed up in a vacant cabin in the Angelus Oaks area of Big Bear.

Another deputy, who was later identified at the press conference as Alex Collins, from the Yucaipa office, was also wounded in the same gun battle. According to McMahon, Collins is currently at a hospital being treated and went through a couple of different surgeries.

"I just spoke to his wife," said McMahon of Collins. "He's in good spirits and should make a full recovery after a number of additional surgeries."

Before he fled to the cabin, Dorner had highjacked a pickup truck.

He then "abandoned the vehicle, ran into the forest, and hid inside this cabin before he barricaded himself. He was engaged in gunfire and shot two of our deputy sheriffs," said sheriff spokesperson Cindy Bachmann.

The cabin eventually caught on fire and a charred body was found inside, although authorities have yet to confirm it was the man they were seeking for over a week.

Meanwhile, Riverside police held a funeral for the officer killed in last week's gun battle. CBS San Diego affiliate KFMB reports Michael Crain, a 34-year-old father of two, was allegedly shot by Dorner when the fugitive ambushed him and another officer. The second officer was wounded.

Lt. Andra Brown from the San Diego Police Department told the station several officers traveled to the funeral Wednesday to pay their respects to Crain and flags at San Diego Police headquarters in downtown will remain at half staff.