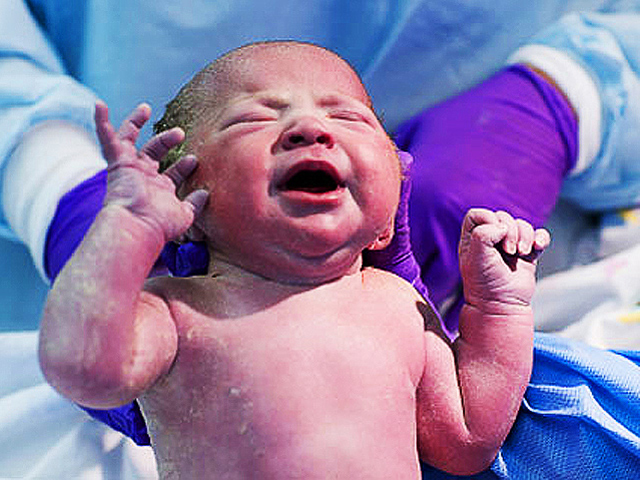 WASHINGTON -- Show more patience in the delivery room: That's the prescription being given to the nation's obstetricians.

New guidelines say doctors should give otherwise healthy women more time to deliver their babies vaginally before assuming that labor has stalled. The recommendations are the latest in years of efforts to prevent unnecessary C-sections.

"Labor takes a little longer than we may have thought," said Dr. Aaron Caughey, who co-authored the guidelines for the American College of Obstetricians and Gynecologists.

The recommendations are being published jointly Thursday by two groups of pregnancy specialists -- ACOG and the Society for Maternal-Fetal Medicine -- amid growing concern that C-sections are overused.

Nearly 1 in 3 women in the U.S. gives birth by cesarean. Yes, C-sections can be life-saving for mother or baby. But they also can be done for convenience or fear of lawsuits, and the surgery can bring some serious health risks. And having one cesarean greatly increases the chances that a next pregnancy will end in one, too.

One of the main reasons for a first-time C-section is labor that's progressing too slowly, ACOG's analysis found.

How long should labor take? There's no clear-cut deadline, and every woman is different, stressed Caughey, obstetrics chairman at the Oregon Health and Sciences University.

"My patients ask this every day," he said. He tells them it can "run the gamut from six hours long, start to finish, to three and four days" at the other extreme.

Whether labor is too slow is assessed at different time points - and what doctors were taught in medical school about the different stages may not be the most up-to-date.

A 2012 study from the National Institutes of Health found that one particular stage takes up to 2 1/2 hours longer now than it did in the 1960s, when many labor definitions were set. Partly that's because today's mothers-to-be tend to be older and weigh more. But it's also because of some changes in obstetric practice, such as more use of painkilling epidurals that can slow labor.

So the obstetricians' group took a closer look. Among the recommendations for otherwise low-risk mothers and babies:

-Don't order a C-section just because the first and longest phase of labor is prolonged. This so-called latent phase is when contractions are mild and far apart, and the mother's cervix is barely dilated. Historically doctors considered it stalled if it lasted longer than 20 hours for a first-time mom, or 14 hours for other mothers.

-"Active labor" begins later than once thought, not until the cervix is dilated 6 centimeters. Active labor is when contractions become stronger and more frequent, and the cervix begins to dilate more rapidly until the woman eventually is ready to push. Doctors once thought active labor began when the cervix was dilated 4 centimeters, but recent research shows that dilation remains pretty slow until reaching the new threshold.

That's an important change because many doctors won't admit women to the hospital until they're in active labor, unless they need more care for another reason.

"As soon as someone is admitted to the hospital, they're kind of on the clock," Caughey said.

-If women aren't too tired, allow them to push at least two hours if they have delivered before, three hours if it's their first baby. They may push longer if they had an epidural as long as the doctor can see progress.

-Forceps can offer a safe alternative to certain cesareans if used by an experienced, well-trained physician. Few physicians today undergo the training.

The advice shouldn't be a surprise to doctors who've been paying attention to recent research about labor times, but it's hard to predict how quickly they'll change long-term practices, Caughey said.

Some women's groups have long warned that rushed labor was fueling cesareans, and Lamaze International welcomed the guidelines and said mothers-to-be need to know them, too.

"They need to have a better understanding of what normal labor is," said Lamaze president Michele Ondeck.

She advised expectant mothers to ask about the cesarean rate before choosing an obstetric practice, and then before the due date to discuss how the doctor supports women in labor and what he or she considers too long. If the doctor says labor has stalled, it's OK to ask if mom or baby is in danger and if there are alternatives to an immediate cesarean, Ondeck said.