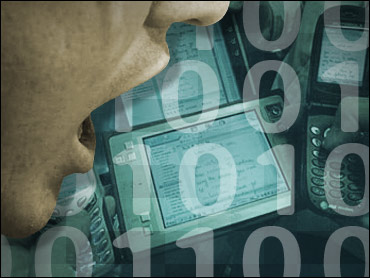 Euphemism and allegory have always been common in business - where few get fired, but plenty get "downsized" - but some say the tongue-twisting technology industry has gone too far.

Alan Freedman, who has been writing technology encyclopedias for 25 years, realized things were out of hand when people started asking him to decipher technology companies' own marketing materials - the stuff they use to entice regular people to buy their products.

"The marketing people are so bad at hyping their products that, with all my experience, I'll have to read and reread and reread just to figure out what this thing does," says Freedman, founder of The Computer Language Company Inc. in Point Pleasant, Pa.

Anyone who's worked in the technology industry has their list of pet peeves, and "solution" is commonly a headliner.

Before the mid-1990s, if you had a problem, you needed a solution.

Now, "It's used so much in the tech industry that it's lost its meaning," said Tim Schellhardt, director of editorial services for the PR firm Ketchum in New York.

Other buzzwords that grate include "enterprise" and "scalable."

When Fredric Paul first started hearing the word "enterprise," he wondered if all the people spouting it were "Star Trek" fans.

Years later, enterprise - high-tech speak for big company, not the big spaceship commanded by Captain Kirk - shows no signs of going away.

Paul, editor-in-chief of the Internet site TechWeb, says he's dismayed that words he lampooned back in 1999 remain pervasive today.

He longs to see the demise of "scalable," for instance, which is tech lingo for something that can get bigger.

"My son is scalable, he's got built-in room to grow," he says.

Other overused buzzwords include "viral marketing" - meaning a marketing campaign that spreads at lightning speed and "stickiness" - which refers to something that keeps a person interested in a Web page. While these words are intended to convey something positive, some think they conjure up an unsightly plague.

Even blog, a fusing of "Web" and "log" that refers to online diaries, made Lake Superior State University's annual list of words that should be banished.

"Many who nominated it were unsure of the meaning," the list's authors noted. "Sounds like something your mother would slap you for saying."

How did all this tongue-twisting start?

It began in the 1980s, when Microsoft Corp. and Apple Computer Inc. were struggling to make their products sound appealing to a tech-averse public, said Tim Bajarin, a principal analyst with Creative Strategies

Instead of proclaiming that Microsoft's Office software would improve workers' ability to crunch numbers, compile data and type up letters, Microsoft sought to sell it as a "solution" to workaday problems, he says.

Apple co-founder Steve Jobs promoted the "experience" of using an Apple computer way back in 1984 - before many people could see why they'd want one of the pricey, clunky boxes in their homes.

"Today the PC is often still considered just a tool, but together we need to make it a lot more than that. We need to make it a path to experiences," Jim Allchin, Microsoft's top Windows executive, told hardware developers in an "experience"-heavy speech last May.

Ryan Donovan, a Hewlett-Packard Co. public relations director, concedes that terms like "data migration" and "optimizes agility" - both of which are found in the company's press materials - might confuse average readers. But the company uses those phrases in documents intended for technology experts and executives, he says.

Many doubt a return to less confusing words is coming.

"In some ways, it's almost becoming filler, like 'um' or 'ah,"' says Brett Good, an executive with staffing firm Robert Half International, whose Accountemps unit recently polled executives on their most-hated buzzwords. "It's something that's just been built into the lexicon of American business."