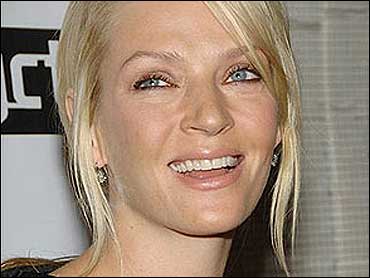 A judge Wednesday threw out a felony charge against a former mental patient accused of stalking Uma Thurman, leaving him to face two misdemeanor counts at a trial that would likely require the "Pulp Fiction" star to testify.

The basis for the coercion charge was an e-mail that Jack Jordan sent to Thurman, saying he would kill himself if he saw her with another man. Justice Gregory Carro agreed with the defense that the threat was unlikely to have any effect on Thurman.

Threatening to kill yourself "is not chargeable," Carro said.

The judge set Feb. 5 as a tentative trial date.

Defense lawyer George Vomvolakis said that if the case goes to trial, prosecutors would have to call Thurman to testify that she feared for her life because Jordan repeatedly tried to contact her.

But Vomvolakis said he hoped to work out a plea deal in which Jordan will enter a psychiatric program.

Jordan, 36, was arrested last year on charges of stalking Thurman for two years, including trying to get into her trailer on a Manhattan movie set and sending her and her family members numerous e-mails. He has been free on $10,000 bail.

Eva Mendes' sexy smile took first place with a whopping 38 percent of the vote from all cosmetic dental professionals polled. Mendes was recently voted No. 7 in Maxim's Hot 100 issue and was also named Cosmopolitan Magazine's Fun, Fearless Female of the Year in 2007.

Actress Kate Hudson was noted for her glamorous grin in third place.

The AACD smile professionals agreed that award-winning Hollywood hunk actor and happy father of four, Brad Pitt, has the No. 1 male celebrity smile.

Will Smith's celebrity smile was good enough for third place.

3U.S. District Judge R. Barclay Surrick ordered rapper Beanie Sigel to serve one day in federal prison and extended his probation, which was slated to end next month, by 18 months.

The first six months are to be served in a halfway house, meaning that Sigel will be unable to travel to promote his latest album, "The Solution."

The 33-year-old rapper, whose real name is Dwight Grant, has been involved in a series of legal problems in recent years but told the judge he is not the person he used to be.

Surrick acknowledged that Sigel has made some positive contributions but said his actions must have consequences.

His albums include "The Truth," "The Reason," "The B. Coming" and "The Solution." He also starred in the movie "State Property" and its sequel.

4A concert marking the 40th anniversary of Johnny Cash's famous concert at Folsom State Prison has been scrapped, with the prison and the promoter blaming each other for the cancellation.

The tribute concert, scheduled for Sunday, was to have been staged in the same prison cafeteria where Cash performed before inmates on Jan. 13, 1968. That breakthrough performance became a popular live album.

The show, which would have been streamed worldwide over the Internet, was to have been underwritten by four nonprofit groups that were to share the venture's profit.

The concert also was to have featured Cash's music and include drummer W.S. "Fluke" Holland, one of his original backup musicians.

5Dolly Parton's dinner theater, the Dixie Stampede, abruptly closed its Orlando branch after receiving a lucrative offer for the land it sits on.

The 1,086-person theater was situated alongside Orlando's busy Interstate 4, a few miles from Walt Disney World. Stampede spokesman Pete Owens said the company received unsolicited offers for years on its 13 acres, but couldn't turn this one down.

The famed country singer's company runs the dinner-theaters, but she does not perform at them.

"We at Dixie Stampede have been blessed, but I am a firm believer in timing and opportunity," Parton said in a written statement. "This was an opportunity we could not pass up. We're exploring our options now and we will be back better than ever!"

Stampede employees, which range from office workers to performers and support staff for the production's many horses, bison and other animals, were shocked and upset.

Owens said the company had no choice, because the deal wasn't finished until Monday. He said it couldn't tell the estimated 150 to 200 workers until then, because it would have been speculative.

A confidentiality agreement prevents Dixie Stampede from disclosing who bought the land or for how much, because the buyer wants to make a separate announcement, Owens said.

Joan Ingpen, an influential classical music manager who played a major role in the career of Luciano Pavarotti, has died at age 91.

Ingpen represented Sir Georg Solti, the charismatic conductor, during the 1950s before she became artistic administrator of London's Royal Opera House in 1961. But she likely will be best remembered for bringing Pavarotti onto the world stage.

The sharp-thinking and occasionally sharp-tongued Ingpen hired Pavarotti in 1963 to stand in for Giuseppe Di Stefano in the role of Rodolfo in Puccini's "La Boheme" at Covent Garden. Earning great acclaim for his performances, Pavarotti, who died last year, went on to become the world's most popular tenor.

Ken Nelson, a longtime talent scout at Capitol Records who produced dozens of No. 1 country music hits and helped take Buck Owens and Merle Haggard to the top ranks of country stardom in the 1960s, has died. He was 96.

Nelson died Sunday of natural causes at his home in Somis, his daughter, Claudia Nelson, told the Los Angeles Times. Somis is about 54 miles northwest of Los Angeles.

A co-founder of the Nashville-based Country Music Association who spent more than two decades in charge of Capitol's country music division, Nelson produced upward of 100 No. 1 country hits including Hank Thompson's landmark 1952 hit "The Wild Side of Life," which spent 15 weeks at the top of the charts and sent Thompson's popularity skyrocketing.

Nelson is credited with helping to define the country genre's twangy "Bakersfield sound," after he showcased the country singers working in and around Bakersfield in the 1950s.

It's set to begin next Monday.

The court is also dismissing a defense request to move the trial out of Ocala, Fla. Lawyers for the actor have argued that he can't get a fair trial in Ocala.

A federal indictment charges Snipes with fraudulently claiming refunds totaling almost 12 million dollars in 1996 and 1997 for income taxes already paid. Snipes is also charged with failing to file returns from 1999 through 2004.

Eminem is recovering from a bout with pneumonia that sent him to the hospital.

"Over the holidays, Marshall Mathers, aka Eminem, was under doctor's care at a Detroit-area hospital for complications due to pneumonia," the rapper's publicist, Dennis Dennehy, said Tuesday. "He has since been released and is doing well recovering at home."

Eminem, 35, rose to stardom thanks to a number of best-selling CDs, personal lyrics and a starring role in the hit 2002 film "8 Mile."

He has won Grammys, including best rap album for "The Slim Shady LP," "The Marshall Mathers LP" and "The Eminem Show," as well as an Oscar for the song "Lose Yourself" from "8 Mile."