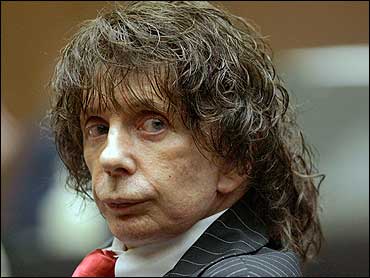 The first day of testimony in music producer Phil Spector's murder retrial has been canceled after a juror fell and broke his foot in the court parking lot.

Superior Court Judge Larry Fidler made the move on Thursday after speaking with the juror, who is the first alternate. He says the man wants to continue after receiving medical attention.

The judge says he is reluctant to lose an alternate juror this early in the trial and would await the man's return on Monday. The trial is not in session on Fridays.

A paparazzo suing Keanu Reeves told jurors that he could not remember giving conflicting accounts of an incident involving the actor that he claims left him seriously injured.

Alison Silva buckled under questioning by Reeves' defense attorney and acknowledged he was beaten by fellow photographers while shooting photos of Britney Spears earlier this year. That assault came roughly a year after the incident in which Silva claims Reeves hit him with a car and left him unable to work.

Silva acknowledged the beating left him unconscious and forced him to delay a second surgery to repair damage in his left wrist he attributes to the run-in with Reeves.

The 28-year-old Brazilian-born paparazzo spent his second day testifying about the incident and his subsequent treatment. He is suing the star of "The Matrix" and "Speed," claiming he hit him with his Porsche in March 2007 while Silva was trying to shoot photos of the actor behind the wheel.

Jurors on Wednesday also heard from a fire department captain who testified that Silva complained of pain in his left knee moments after his fall, despite his later statements to doctors and testimony that Reeves' Porsche hit his right knee and that it hurt afterward.

The captain also testified that Silva was clutching his camera when paramedics arrived, contrary to the paparazzo's testimony that he dropped his camera when he says Reeves hit him with his Porsche.

George Strait will receive the Academy of Country Music's Artist of the Decade award.

The ACM announced Thursday that Strait will receive the award in recognition of his nearly 25-year career. Only four other acts have received the distinction: Marty Robbins in 1969, Loretta Lynn in 1979, Alabama in 1988 and Garth Brooks in 1998.

Strait's many hits include "Amarillo By Morning," "Ocean Front Property," "Check Yes or No," and "I Saw God Today."

The ACM will tape a TV special in honor of Strait at the MGM Grand Garden Arena in Las Vegas on April 6, 2009, to air at a later date.

The 44th Annual ACM awards will air live on CBS from the MGM Grand on April 5, 2009, with Reba McEntire hosting.

David Rockwell crafted the current home of the Academy Awards show. Now he gets to jump in on Hollywood's big night itself.

Rockwell will be production designer for the Oscar show on Feb. 22, the Academy of Motion Picture Arts and Sciences announced Thursday.

The 52-year-old architect, who has also handled the set design for "Hairspray," "Legally Blonde" and other Broadway productions, joins a team of fresh faces overseeing the 81st Oscar show, led by producer Laurence Mark and executive producer Bill Condon, filmmakers working on the ceremony for the first time.

"David is an innovator who possesses the outstanding combination of truly firsthand knowledge of the Kodak Theatre and superb design work in a variety of realms, including film and theater," said Mark and Condon in a joint statement. "We're pleased to be collaborating with someone whose talents are so diverse."

Also new to the telecast is producer Roger Goodman, vice president of special projects at ABC. Goodman, a multiple Emmy winner who will direct ABC's presidential inauguration coverage a month before the Oscars, has many major sporting events, news programs and awards shows to his credit, including the Academy Awards Countdown Show.

The ceremony is in the early planning stages and nominations will not be announced until Jan. 22, but Rockwell had one early prediction about the show.

"I think we'll see things never seen before at the Oscars," Rockwell said. "One of the things about the Oscars is there are such thrilling possibilities. It is one of the great kind of communal rituals of the entire world."

His firm, New York City-based Rockwell Group, designed the 3,500-seat Kodak Theatre in the heart of Hollywood, the venue for the Oscar show since 2001.