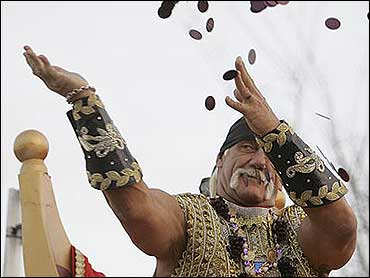 Hulk Hogan took the witness stand Wednesday as the pro-wrestler's divorce case played out in Clearwater, Fla. Hulk Hogan, whose real name is Terry Bollea and his estranged wife, Linda, are back in court trying to sort out the terms of the couple's divorce.

The 54-year-old Bollea and his wife have been married 24 years. The hearing is expected to last into Thursday.

The judge refused release to Terry Bollea -- aka The Hulk -- from an earlier order to go ahead with the purchase of a Las Vegas condominium.
Linda Bollea wants to close on the more than four million dollar property. Her attorney said she doesn't want to lose the down payment and face possible penalties.

The couple put down $840,000 on the property in 2005, several years before Linda initiated divorce proceedings.

The Bollea's much-publicized divorce comes as their son, Nick, continues to serve an eight-month jail sentence for the crash left his friend John Graziano permanently injured and hospitalized.

A judge says a woman accused of stalking John Cusack is competent to stand trial, but cannot represent herself.

Los Angeles Superior Court Judge Susan M. Speer made her ruling Wednesday afternoon based on a psychiatrist's evaluation of Emily Leatherman. The 33-year old was arrested earlier this year outside of the actor's home.

The judge made his ruling based on the recommendation of a court-appointed psychiatrist who evaluated Leatherman and said she was "delusional" and "paranoid."

Leatherman sobbed in court and repeatedly talked over Speer, prompting the judge to issue her several warnings. The judge appointed an attorney to represent Speer during her trial, which she says can begin Sept. 9.

Detroit Charities To Get The Who's Show Earnings

Don't be fooled: The Who won't make a cent off their Detroit-area concert this fall.

The British rockers say all earnings from their Oct. 21 show at The Palace of Auburn Hills will go to Detroit charities Gleaners Community Food Bank and Focus: HOPE.

Lead singer Roger Daltrey said in a statement on the band's Web site that The Who have a soft spot for Detroit and know Michigan is facing tough economic times.

Tickets for the show starting at $39.50 went on sale Monday. Some tickets were still available Wednesday afternoon.

The Palace concert kicks off a nine-city North American tour. The Who will continue on to Boston, Philadelphia, Washington and Los Angeles.

A whopping 1,500-plus fans arrived at the Apple store in New York on Tuesday to watch the Jonas Brothers perform a special gig for the launch of their new album "A Little Bit Longer."

Kevin, Joe and Nick were met by hundreds of screaming teenage fans on arriving at the store.

The boys belted out songs from the new album, with fans singing along to every word.

"A Little Bit Longer" is the brothers' third studio album, but it was their second album, aptly titled 'Jonas Brothers' (released in August 2007), which catapulted them to pop stardom.

"We really owe it to our fans," said Kevin Jonas when asked about their phenomenal success this year.

"They've, really in the last year, kicked into high gear with coming to the shows, following the music and continuing to talk about it online. The online thing has been really big for us: the YouTube videos, the MySpace, all of that. But for us, all of them outside make it all possible," he added.

The first four singles from the new album have all hit the number one spot on iTunes. The brothers also made history after being the first band to sell more than 100,000 digital downloads for their first three singles from the album - "Burnin' Up," "Play My Music," and "Pushin' Me Away."

The boys are certainly lapping up the success. "We are just really living the dream right now," said Kevin.

"For us, having this album finally hit stores and having them sing the songs, knowing that they can actually hear them and have it in their possession is the most amazing thing for us. We're so excited," he said.

Tuesday's performance will eventually be included in a live album to be sold on iTunes. Jonas Brothers reps say it's expected to be released during the holiday season.

It's a case of meet the parents for Nicole Kidman. The Oscar-winner is enjoying being a mum and sharing her new addition with her family in Australia.

The star and her husband, Keith Urban, have been out and about in Sydney where they have been showing the new baby to their parents.

Talking to local radio station 2DAY FM on Aug. 7, the actress revealed that her daughter takes after her dad and looks like Keith, although her hair has a "reddish tint".

She also explained that the birth went smoothly, but that she got plenty of advice from her sister, who has fout kids, and her mother, who is a mid-wife.

In the interview Kidman also appealed for the media to give her space to walk around and show her baby around Sydney.

The actress explained that it's shocking when photographers get up extremely close.

Kidman also has two adopted children, Isabella and Connor, from her marriage to Tom Cruise.

A federal appeals court has reversed a ruling that awarded John Steinbeck's son and granddaughter publishing rights to 10 of the author's early works, including "The Grapes of Wrath."

The appeals court in Manhattan said Wednesday a lower court judge made a mistake in calculating that the works belonged to the son, Thomas Steinbeck, and granddaughter Blake Smyle.

The son and granddaughter had won rights previously held by various individuals and organizations, including Penguin Group Inc. and the heirs of John Steinbeck's widow, Elaine. The appeals court ordered the lower court judge to rule in favor of Penguin and Elaine Steinbeck's heirs. She died in April 2003.

A lawyer for the author's son and granddaughter did not immediately return a telephone message seeking comment Wednesday.

Zac On The Fast Track

We already know he can sing and dance - now Zac Efron is skipping "High School" to go high speed racing.

The actor took a break from walking red carpets to get a crash course in fast driving at the Infineon Raceway in Sonoma, Calif.

Before he got behind the wheel, he was trained by professional instructors about car control, accident avoidance, and breaking.

Reaching speeds over 100 mph, Efron experienced the thrill of racing against other Audi high-speed performance vehicles on one of the most renowned raceways in the world.

The "Hairspray" star says he enjoyed putting his pedal to the metal:

"The Infineon Raceway is a great course to learn on because it's not what they call like a horsepower course," said Efron. "It's more of a technical course in that you have to learn about taking a wide radius on the turns and the apexes of your turn, which is what I've been learning today."

Rising starlets Adrienne Bailon, Kiely Williams, Sabrina Bryan, and an onslaught of the Disney Channel's most famous teen and pre-teen faces graced a festive blue carpet for the Hollywood premiere of "The Cheetah Girls One World."

In this trequel to "The Cheetah Girls," the multi-talented trio travel to India to take Bollywood by storm. The only problem is when they get there, they discover they must compete against one another for the starring role in the movie of their dreams.

This time around the girls' singing and dancing abilities aren't the only qualities that are tested. The young females of the hour, Bailon, Williams, and Bryan, said they think it's their unique qualities as individuals that appeal to audiences.

Executive Producer Debra Martin Chase said the move to create a third Cheetah Girls movie came at a perfect time, and was done in the perfect setting of India, the movie-making capital of the world.

Actress Deepti Daryanani shares the screen with The Cheetah Girls and teaches them how to dance Bollywood style. She says the movie sends an important message.

"Firstly, you know as youngsters, you know as The Cheetah Girls, these three women they represent the youth and children as being vulnerable, you know eight to 14 years," said Daryanani. "They look upon to them and to their music and to their dance, and what they want to convey through their movies basically is friendship and love."

The news of the deaths of funny man, Bernie Mac and music man, Issac Hayes over the weekend came as double blow to director, Malcolm Lee.

Both the comedy actor and the singer and composer are set to appear in cinemas this year in Lee's film, "Soul Men."

Mac passed away in a Chicago hospital Aug. 8 from complications related to pneumonia.

While officials have confirmed Hayes died of a stroke on Aug. 9 after collapsing at his home near Memphis.

Hayes appears as himself and Mac plays a soul singer who agrees to appear in a tribute concert to his old band leader. The film also stars Samuel L Jackson.

Distributor, The Weinstein Company, has announced no plans to change the movie or its release date.

But Malcolm Lee told USA Today that although the film is largely edited already he intends to go back to the cutting room to create a fitting farewell to both performers.