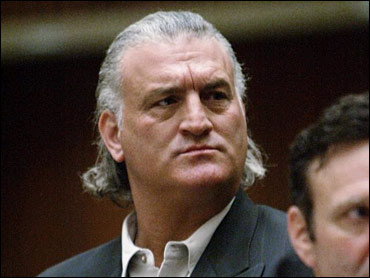 Joey Buttafuoco, who became infamous for an affair with a teen who shot his wife in 1992, has been sentenced to a year in jail in Los Angeles. The auto body shop owner was convicted of involvement in an insurance fraud scheme.

Buttafuoco, 48, pleaded guilty to a single felony count and was immediately booked into the Los Angeles County Jail.

Defense attorney Jonathan J. Kissel said that because Buttafuoco is a public figure "any drawing out of the case would work to his disadvantage."

Superior Court Judge David Horwitz also sentenced Buttafuoco to five years of probation and ordered him to pay more than $4,600 in restitution.

Buttafuoco was a New York auto body shop owner in 1992 when Amy Fisher - a 17-year-old high school student with whom he was sexually involved - shot his wife in the face. Fisher, who ultimately served seven years in prison, was at the center of a firestorm of media coverage - including TV movies - spawned by headlines calling her the "Long Island Lolita."

While in prison, she filed a $220 million lawsuit - later dropped - accusing five corrections officers of raping her while behind bars.

When she got out of prison in 1999, Fisher said through her attorney that she had a job in the fashion industry and wanted to be left alone and given some privacy.

Three years later, however, she accepted a gig for an on-camera boxing match with former figure skater Tonya Harding - a job offer that was KOed by her parole board as sending "an inappropriate message to victims of violent crime."

For his own part in the 1992 case, Buttafuoco pleaded guilty to one count of statutory rape and served four months in jail.

After his release, Buttafuoco and his wife, Mary Jo, moved to California - where he continued to show up in the headlines from time to time.