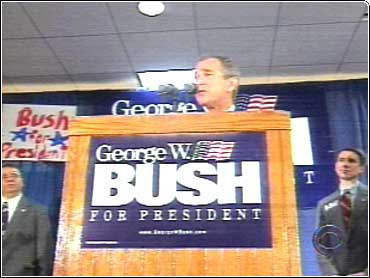 In Iowa, front-running Republican George W. Bush is mounting a final push against caucus surprises from Steve Forbes or anyone else. CBS News' Bill Whitaker reports from the Republican caucus tabulation center.

Texas Governor George W. Bush was beating the bushes today to herd his supporters to the caucuses. He's been full of angst lately that his double digit lead in the polls might make his supporters overconfident.

"It's been great expectations surrounding me ever since I got started," Bush said, "so I'm used to it."

But he seemingly wasn't expecting all the pushes and pulls of this first big election year event. In this state, where the most active caucus-goers are Christian conservatives, he was prodded to state more clearly than ever before his opposition to abortion. Meanwhile, across the country, Bush's main challenger, Arizona Senator John McCain, keeps pressing Bush on taxes, turning up the heat for the New Hampshire primary next week.

But before then, Bush's well-oiled organization is calling out the Iowa faithful right up to the last minute, hoping not only to win, but to win big and beat expectations.