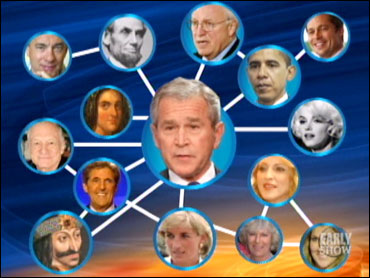 This week, thanks to a New York Post story about genealogy, we're getting a glimpse at the rather surprising family tree of President Bush himself, reports CBS News Early Show national correspondent Tracy Smith.

We all know who the president's father is, but what about his cousins?

Thanks to research done by Ancestry.com, we know that Cheney, the man who's only a heartbeat away from the presidency, is actually a blood relation to the president. He's Bush's Mr. ninth cousin once removed.

And Mr. Bush shared more than just a ballot with John Kerry in 2004 -- that's right, they're ninth cousins, twice removed.

Trace the family tree far enough, and you get Madonna, Celine Dion and Tom Hanks -- which shows that genealogy can sometimes be like a box of chocolates: You never know who you're gonna get.