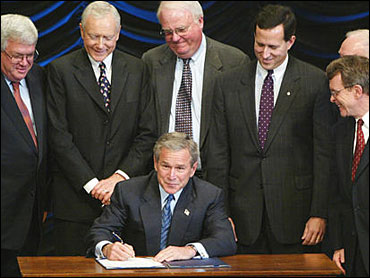 A federal judge in Nebraska called the law "highly suspect" and issued a temporary order blocking it from applying to four abortion-rights doctors who filed suit.

After years of frustration, legal setbacks and two presidential vetoes, hundreds of anti-abortion leaders rose in applause when Mr. Bush promised to vigorously defend the constitutionality of the law, known by its supporters as a "partial birth abortion" ban.

"For years a terrible form of violence has been directed against children who are inches from birth while the law looked the other way," Mr. Bush told religious leaders, members of Congress and other abortion foes at a signing ceremony at the Ronald Reagan Building. "Today at last the American people and our government have confronted the violence and come to the defense of the innocent child."

Abortion-rights groups said the law was overly broad, lacked any exemption for the health of a woman seeking an abortion and could outlaw several safe and common procedures. They also contended it was the first step in a larger campaign to ban all abortions for the first time since the Supreme Court's 1973 landmark decision legalizing the procedure.

"This bill marks a concerted effort to set back decades of progress in achieving reproductive freedom," said Gloria Feldt, president of the Planned Parenthood Federation of America, which filed suit against the measure in San Francisco.

The bill gave Mr. Bush a major victory to show religious conservatives on the eve of a re-election year. But it also revived debate on a polarizing issue that could undercut his hopes of winning support from swing voters.

The bill outlaws a procedure generally performed in the second or third trimester in which a fetus is partially delivered before being killed, usually by having its skull punctured. Former President Bill Clinton twice vetoed similar bills.

While anti-abortion forces cheered their victory, arguments against the law were raised in courtrooms in Lincoln, Nebraska; San Francisco and New York.

"We are likely to see many more of these sorts of challenges around the country in the next few days and weeks as opponents of this new law try to convince a federal judge somewhere that there ought to be a national ban," says CBSNews.com Legal Analyst Andrew Cohen.

Cohen says what happens next will be an appeal to the federal appeals court, which means "this issue might get right back to the U.S. Supreme Court, which just a few years ago blocked a Nebraska law like this one from taking effect. The question going forward is whether this federal law is different enough from that Nebraska law to change its fate."

In Lincoln, U.S. District Judge Richard Kopf issued a temporary restraining order, citing concerns that the law lacked any health exception. "It seems to me the law is highly suspect, if not a per se violation of the Constitution," Kopf said. He said his order would apply only to the four doctors who filed the lawsuit, but the ruling could extend beyond Nebraska because they are licensed in Alabama, Georgia, Iowa, New York, South Carolina and Virginia.

In Manhattan, U.S. District Judge Richard Casey appeared skeptical about arguments by Talcott Camp, a lawyer for the American Civil Liberties Union, which sought an order blocking enforcement. Casey did not issue an immediate order.

"Doesn't the court have to give some deference to the findings of Congress that are spelled out in this statute?" Casey asked, noting the findings resulted from eight years of hearings.

About 30 states have enacted versions of partial birth abortion bans but in many cases they have been overturned in court. The most important ruling was in 2000 when the Supreme Court, on a 5-4 vote, said a Nebraska law was unconstitutional because it did not have an exception for the health of the mother and was too vague.