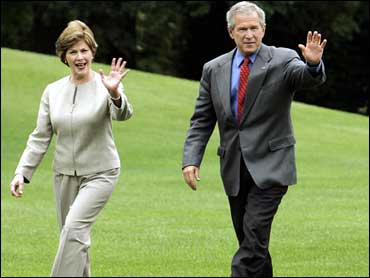 President Bush prodded Iraq's neighbors on Monday to do more to help in its reconstruction and said he would push nations around the world to make good on aid they have promised.

"Iraq's neighbors ought to do more to help," the president said after a day of discussion with his top national security advisers on Iraq's future.

"I think what they'll talk about today is, as they do periodically, is about the overall strategy in Iraq and the three major dimensions - the security dimension, the political dimension, economic dimension," retired General Richard Myers, former chairman of the Joint Chiefs, told CBS News' The Early Show.

Mr. Bush said that nations around the world — many of them outside the Middle East — have pledged $13 billion for Iraq and "we expect our friends ... to honor those commitments."

Mr. Bush said he and his advisers talked about security in Iraq, particularly in Baghdad and Basra. He said the message he wanted to send the government there was, "We stand with you."

"Whatever we do will be based upon the conditions on the ground. This is a process," Mr. Bush said.

Gen. George Casey told CBS News he thinks it will be possible to withdraw some of the 130,000 U.S. forces in the months ahead as long as Iraq's government and security forces make progress.

Mr. Bush also said the United States would target the successor to terrorist leader Abu Musab al-Zarqawi. "I think the successor to Zarqawi is going to be on our list to bring to justice," the president said.

He said he and his advisers discussed oil production and how Iraq can best use the resource to the benefit of its people. Mr. Bush expressed hope that the new government would use oil to unite the country, perhaps having a fund that could benefit all and mend the sectarian division.

"The oil sector is very much like the rest of the infrastructure," Mr. Bush said. "Saddam Hussein let it deteriorate."

The Camp David meeting began as violence insurgents stepped up attacks to show they weren't defeated by the U.S. airstrike that killed Abu Musab al-Zarqawi, the leader of al Qaeda in Iraq, near Baqouba on Wednesday. Mr. Bush is hoping to bolster declining public support for the war by capitalizing on momentum from the death of al-Zarqawi and Iraqi Prime Minister Nouri al-Maliki's appointments last week of key national security ministers.

But CBS News chief White House correspondent Jim Axelrod reports with the number of military dead now approaching 2,500, the injured 18,00 and the cost at more than $300 billion and rising, the administration may be approaching a make-or-break point with the American people, which may explain the president's call for more countries to share the financial burden.

Mr. Bush has said the new government marks a new chapter in the U.S. relationship with Iraq. With Republicans worried about losing control of Congress in November's midterm elections and most Americans saying they would like some troops to come home, Mr. Bush is under pressure. Only a third of respondents to an AP-Ipsos poll in early June supported Mr. Bush's handling of the situation, an all-time low.

But he has been careful not to signal any troop reductions yet, continuing to say he will make those decisions when commanders in the field advise him to do so.

Casey said reductions could be coming soon, albeit slowly.

"I think as long as the Iraqi security forces continue to progress and as long as this national unity government continues to operate that way and move the country forward, I think we're going to be able to see continued gradual reductions of coalition forces over the coming months and into next year," Casey told CBS Evening News and Face The Nation anchor Bob Schieffer.

But even if Iraqi troops do take the lead, there are still likely to be thousands of U.S. troops in Iraq for years to come. However, any progress would help the Bush administration politically would show that there is at least an exit strategy, Plante reports.

Mr. Bush announced the Camp David meetings last week, as he applauded U.S. forces for conducting an airstrike that killed Abu Musab al-Zarqawi, the leader of al Qaeda in Iraq. The president has cautioned that al-Zarqawi's death will not end the war, but he says it will help.

"The path that Iraq has been on now with a constitution and an elected government, with the security forces coming up to speed fairly quickly at this point, and with security forces performing well, despite all the sectarian violence…there's alot of positive developments," General Myers said on The Early Show Monday.

"Whether it's a turning point or not, I think we'll have to wait," Myers added.

Rep. John Murtha, D-Pa., a critic of U.S. involvement in Iraq, said Monday that now is "a perfect time" for a troop withdrawal. "People want a change in this country ... a change in direction, and I hope the president hears that and I hope the Iraqis ask us to leave," Murtha said on ABC's "Good Morning America."

"Even this attack on Zarqawi happened from the air," Murtha said. "There's no real need for us to be inside the country."

The re-evaluation of the administration's Iraq policy starts with a long day of meetings for Mr. Bush, his national security team and the military commanders. It continues with a luncheon attended by outside experts and dinner Monday night.

On Tuesday, the sessions conclude with a joint meeting via videoconference with Mr. Bush's Cabinet and top ministers in al-Maliki's new government.