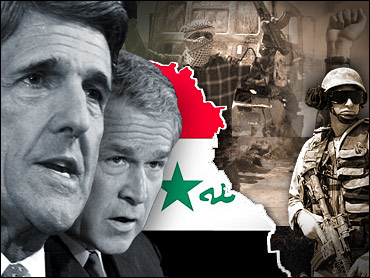 President Bush and challenger John Kerry accused each other of misjudging the stakes and lacking the leadership to deal with Iraq and terrorism as they campaigned 60 miles apart Wednesday in Iowa, a state Mr. Bush narrowly lost four years ago.

"The next commander in chief must lead us to victory in this war and you cannot win a war when you don't believe you're fighting one," Mr. Bush said in Mason City, a northern Iowa farming community. "My opponent also misunderstands our battle against insurgents and terrorists in Iraq, calling Iraq a 'a diversion from the war on terrorism.'"

Kerry, campaigning in Waterloo, said Mr. Bush failed to grasp what the United States faces in Iraq, where more than 1,100 U.S. soldiers have been killed. "If President Bush cannot recognize the problems in Iraq, he will not fix them. I do recognize them and I will fix them."

With time running out before the Nov. 2 election, national polls say the race is very close, with some showing a slight advantage for Mr. Bush. Polls in key swing states like Florida, Ohio and Wisconsin also show the two candidates running about even.

In the most recent CBS News/New York Times survey, Mr. Bush leads Kerry 47-45 among likely voters, with Ralph Nader taking 2 percent. The latest Washington Post tracking poll has Mr. Bush up 50-47 percent, and a Reuters/Zogby survey has the president with a 46-45 percent advantage. All those polls have the men within the respective margins of error.

Iraq and terrorism dominated the debate Wednesday as Mr. Bush focused on Iowa, Minnesota and Wisconsin — all states that went against him four years ago and where polls show him in a close race with his Democratic rival.

After Iowa, Kerry concentrated on Pennsylvania before heading to Ohio. Four years ago, Mr. Bush lost Pennsylvania and won Ohio; this year the race is tight in both states.

"The president says he's a leader. Well, Mr. President, look behind you, there's hardly anyone there," Kerry said, pointing out considerable allied opposition to the war. "It's not leadership if we haven't built the strongest alliance possible and if America is going almost alone."

Saying Mr. Bush was trying to focus the election on national security, Kerry said, "I welcome that debate. I believe a president must be able to defend this country and fight for the middle class at the same time."

Mr. Bush, trying to depict his opponent as lacking the credentials to be commander in chief, said Kerry was guilty of "a fundamental misunderstanding of the war we face and that is a very dangerous thinking."

He said the threat posed by Abu Musab al-Zarqawi, a Jordanian terrorist who has pledged allegiance to Osama bin Laden and is believed behind beheadings in Iraq, "shows how wrong" Kerry's thinking is.

"If Zarqawi and his associates were not busy fighting American forces, does Senator Kerry think he would be leading a productive and useful life?" Mr. Bush asked. "Of course not. And that is why Iraq is no diversion."

Keeping the focus on terrorism, Vice President Dick Cheney said he was concerned terrorists will try to disrupt the elections, as they did with train bombings in Madrid last March.

"I think if they could get off a shot, I expect that they may well try it," Cheney said in an interview on Fox News Channel. "But at this stage to say we've got specific evidence of an attack that's going to happen during a particular window — no, we can't say that."

While Kerry and Mr. Bush traded charges, there was a moment of embarrassment — and an apology — from the senator's wife over her remarks about first lady Laura Bush.

Teresa Heinz Kerry, in an interview published by USA Today, had said she didn't know if Laura Bush had ever had "a real job." She apologized for having forgotten about the first lady's 10-year stint as a schoolteacher and librarian.

"George Bush will go to any length to cling to power, even if it means diverting his national security adviser from doing her job," said Sen. John Edwards, Kerry's running mate.

White House communications director Dan Bartlett defended Rice's speeches: "We're a nation at war, we're a nation that has troops in harm's way and the president has a foreign policy staff that helps explain the actions we are taking."

Bush campaign chairman Marc Racicot accused Democrats of undermining public confidence in the election with last-minute lawsuits. He said legal efforts to change election rules can "cause problems for election officials and bring chaos ... and circus-like activity that is very confusing and difficult for the American people to understand."

Democrats have sued over alleged ballot and voting restrictions in several battleground states. So have independent groups such as the League of Women Voters and outside groups allied with Kerry.