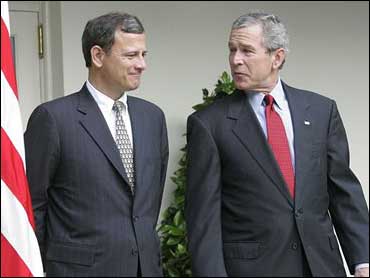 Back in June, when it appeared likely that Chief Justice William H. Rehnquist might retire from the Supreme Court, the top candidate to succeed him was John G. Roberts, Jr.

President Bush didn't just like the 50-year-old judge's consistently conservative jurisprudence and even temperament. He also liked his political acumen and vibrant personality as well.

The president thus saw in Roberts a rare opportunity to help shape the next generation of legal doctrine — to reinforce and perhaps even enhance over the next 30 years or so the conservative gains wrought by the "Rehnquist Revolution."

That's why, after Chief Justice Rehnquist died late Saturday, it was a no-brainer for the president to select Roberts to succeed him even though Roberts already was a candidate to replace Justice Sandra Day O'Connor.

It's a decision by the White House that makes sense practically, politically, and legally — a rare trifecta these days. With one deft change of direction, the president all but ensured we will have a new Chief Justice in place four weeks from now, when the new court term begins.

At the same time, he placed Senate Democrats in a box from which they are unlikely to be able to escape. And, finally, he gave himself some room to nominate a successor to Justice O'Connor who is perhaps even more conservative than is Roberts.

Roberts' new job interview isn't likely to bring the Senate Judiciary Committee to a halt. The substantive questions senators were likely to ask of him before — his views on the right to privacy, on the interaction between the federal government and the states, on the role of religion in public life — all will be asked of him now.

And the change in status from associate justice to chief justice simply isn't great enough to support a dramatic change by Democrats in the burden of persuasion they are likely to require of Roberts.

In other words, all those Democrats who said nice things about Roberts before cannot take them back now that he's in line for the top job. It's not like he was a candidate before to be waiter and now is a candidate to be a chef.

In addition, at the Roberts' hearing, there is likely now to be more of a focus upon Roberts' administrative and political skills and upon his judicial philosophy as it relates to the interaction between the federal judiciary and the other two branches of government.

The chief justice, remember, carries the water for the entire judiciary when it interacts with Congress and the White House on administrative and financial matters.

I expect, then, that the nominee will be asked more about his views about judicial independence and security; about how he sees the court's future into the 21st Century; and about whether he is going to be willing to stand up for his own branch when it inevitably runs into a conflict with the folks who nominated Roberts (the White House) and the folks who confirmed him (the Congress).

But for the Senate Democrats, the president's change of direction makes their job more difficult. Will they require the White House to name the new successor to Justice O'Connor before they permit an up or down vote on Roberts?

Will they thus try to lump together the two candidates as a package deal to try to ensure that the O'Connor successor isn't the conservative ideologue so feared by the left? Will they push to ensure that Justice O'Connor's replacement is as "moderately" conservative as she was even though you could argue that Roberts is less dogmatically conservative than was Rehnquist?

None of these scenarios would seem likely to generate much public support, but I'm not sure the Democrats have many other cards to play in this game of judicial poker. The fact is that Roberts is an attractive candidate on many different levels and there just isn't much politically his opponents can do about it.

The genius of the president's pick back in July is even more evident today. I mean, the guy, Roberts, teared up Monday morning at the White House at the President's mere mention of his former boss, William Rehnquist, for whom Roberts clerked in the early 1980s. The guy is Gary Cooper in a robe —the first Oprah Justice.

The president's swift move to get Roberts in as chief justice also has real ramifications for the operation of the court. Until and unless Roberts is sworn in, Justice John Paul Stevens is administratively in charge of the court because of his seniority (he was nominated by President Ford and confirmed in 1975).

Although Justice Stevens has only one vote, this added administrative authority means that he can assign specific cases to specific justices, a power that can have a substantive impact on the outcome of a case.

By moving quickly to get Roberts confirmed as chief justice before the court opens its doors again next month for oral argument, the president has reduced the amount of time that the moderate-to-liberal Stevens will have this power. It's not a big deal. But it's not a small deal, either. And if it helps generate a favorable outcome for the administration in just one case it will have been worth it.

After 11 years of stasis on the court, new air is soon to arrive. Once Roberts is confirmed, and no matter whom the president selects to replace Justice O'Connor, the court this term will be as conservative, or perhaps even more so, than it was last term. It will be markedly younger, too.

And these changes will make a difference in a few cases this term — which ones no one yet can say. That's the way it always has been on the court. And it's probably the way it always will be. The process this time may be a little funky — death does that to all things. But the result is the same.