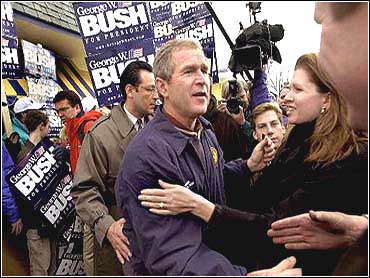 "That was one of the most exhilirating moments of my political career," George W. Bush announced Monday after sledding down a snowy New Hampshire hill with several children. The governor is hoping for more exhiliration Tuesday night when the state's primary results come in. In the meantime, he overworked his metaphors and gladhanded fellow sledders, while a slippery-footed press corps tried to listen in on all of it.

"Is going downhill really the message you want to send before the primary?" one reporter asked. Bush was ready: "That's how I feel - I feel everything is downhill from here. I feel optimistic."

So optimistic that he abandoned his stump speech for the day. Bush evidently feels he's made every point he can make about taxes or education or leadership. In the final full day of campaigning before the primary, he tried to show New Hampshire that he's a good guy, a guy you like. Victory is far from certain for Bush, but almost nothing in his manner betrays that.

Bush's day was full of moments intended to be ordinary, but which, therefore, became freakish. His first stop was the Presidential Pancake Flip-Off. Other than accusing your opponent of flip-flopping on the issues, just as the pancake hits the griddle, it's hard to imagine a metaphor for the flapjack photo op. Nevertheless, the event was a success for Bush: the Texas governor would have won the flip-off easily even if he hadn't tossed a pancake far into the air and caught it successfully on his spatula - his opponent, Gary Bauer, fell off the stage.

Bush was supposed to head next to Exeter, where he was to roam the streets seeking hands to shake and votes to win. In anticipation, reporters and a group of political science students from Massachusetts jammed "The Loaf and Ladle" so completely that only a handful of New Hampshire voters remained. The event might have been a wash for Bush, except that his staff cancelled it, claiming they didn't want to give publicity to the pro-marijuana protesters gathered along the street. Incidentally, there were Gore and Bradley supporters there too.

So Bush repaired to Derry, and Madden's restaurant. On paper, the event was a friendly lunch with just plain folks; in life it's a disruptive, frenzied moment for everyone, perhaps, except the candidate, who grinned afterwards, "That was a great burger! I highly recommend it."

While the governor chatted with local media inside, supporters shuffled and paced outside, waiting for their man to appear. There were children, teens, and older folks in the crowd, most of them waving signs, most enthusiastic. One group, after waiting in the gray chill for over half an hour, gave up and transferred their excitement to lunch at the Taco Bell across the way. But the hardy ones stood outside Madden's and chanted periodically "We're freezin' for a reason - George Bush!"

Some of the faithful frozen ones came from Texas, saying they'd paitheir own way to campaign for their governor in New Hampshire. They praised his leadership and his ability to unify. "He works in a very bipartisan way, rather than being an ideologue," said John Kerr of San Antonio. "He lived out what people hoped he would be,". observed Lacey Dorn. And Diane Untermeyer, after praising Bush's record on education, announced "He can win.".

When a reporter mentioned that to Bush, he turned quickly and said, "You've talked to all of them, have you? I've talked to some that are for me." Then he turned back to a cluster of snow-happy children and giddy sledders, chatting and laughing with the assurance that may be his biggest asset.