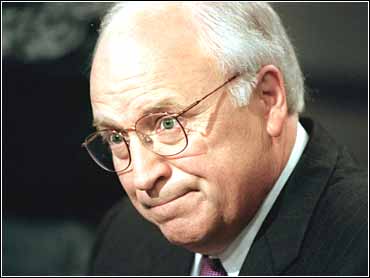 President Bush said he was not troubled by a federal court decision ordering the Energy Department to release documents related to Vice President Dick Cheney's energy task force. The task force came up with a national energy policy that critics say was influenced by big energy companies that contributed to Mr. Bush's campaign.

The White House has refused to turn the records of the energy task force over to the General Accounting Office, the investigative arm of Congress, on grounds it would impede the administration's ability to get candid advice.

"We listened to energy companies, which seems to make sense. If you're developing an energy plan, one place to start is to listen to people who know something about the business. We also listened to environmental groups. We listened to people that were concerned about how to create more conservation," he said.

But, reports CBS News Correspondent Bill Plante, many of the energy people the administration listened to were heavy campaign donors. Of the top 25 contributors in the energy industry, at least nine and possibly as many as eighteen, had meetings with the task force. These companies gave Republicans three times as much as Democrats in the 2000 election cycle.

Similarly, Democrats charge that of 65 people who met with the energy department official reviewing power plant emission rules, 64 were from industry companies which had contributed $6.4 million to republicans.

Even as he said his administration would release Energy Department documents sought in a lawsuit by an environmental group, Mr. Bush was unyielding in his determination to fight the General Accounting Office in its demands for extensive energy task force records.

Mr. Bush repeated his opposition to the Congress' investigative arm trying to pry into "the private conversations the president or the vice president has."

"When the GAO overstepped its bounds to try to get advice given to the vice president and me, we resisted," Mr. Bush said.

"I assume the government is stalling," U.S. District Judge Emmet Sullivan said Thursday at a hearing on a lawsuit pushing for the release of task force documents. Meanwhile, U.S. District Judge Paul Friedman scoffed at the administration's argument that another case should be thrown out of court.

Both suits were filed by Judicial Watch, a conservative group.

On Friday, the Times reported that 18 of the energy industry's top donors to the GOP attended meetings with the vice president or his advisers.

The Times said interviews and task force documents show an apparent correlation between large political donations and access to the Cheney task force.

The newspaper quoted Cheney counselor Mary Matalin as saying the task force also consulted with trade groups and other organizations, including labor unions, that did not give money to the Republican Party.

"Not everyone who got access were contributors or supporters," Matalin said. "No one ever got on the schedule for any reason other than their expertise in the field of energy."

Senate Majority Leader Tom Daschle said the Times' disclosure "clearly leaves a dark cloud over the administration. It makes it appear that they're hiding something, and I don't know that they want to continue with that perception."

The judges' comments Thursday came a day after criticism of the Bush administration by a third judge, U.S. District Judge Gladys Kessler.

Ruling on a lawsuit filed by an environmental group, Kessler ordered the Energy Department to release documents starting March 25. Documents the department withholds must be identified individually in a list to be made public by April 25, which would set the stage for a next round in the court battle.

"So what! ... This is just gamesmanship," Friedman replied. Nine months later, he said, the Bush administration's Cabinet agencies have turned over almost no documents and are withholding tens of thousands of pages from public scrutiny.

In another court session, Sullivan reluctantly gave the government seven additional days to file written arguments on why the Cheney task force should be allowed to withhold all documents. The government had asked for 17 extra days. Sullivan's brief extension means that he could rule as early as the second week of April on releasing material.

A fourth lawsuit also is pending for the task force records, the case filed last week by the General Accounting Office, the investigative arm of Congress.